Guy Benson writes that the picture is worth 1,085 words – one for each day we’ve gone without a Senate budget.

What you’re looking at is a view of today’s Senate Budget Committee meeting, at which Chairman Kent Conrad conducted a faux “markup” of his party’s FY 2013 budget resolution. The near side of the table is where Democrats were supposed to sit. Granted, this entire exercise was somewhat academic because its resulting product would receive neither a vote in this committee, nor in the Senate at large. Details! Throughout much of the session, all 11 Republican members were present to, you know, do their jobs. Of the 12 committee Democrats, no more than 3 or 4 were in attendance at any given time, according to sources inside the meeting. “[The Democrats] showed absolutely no interest in discussing our big picture problems or offering solutions,” a GOP budget aide tells Townhall. “Those who were there showed up only to make a brief statement for the record, then took off. The photo speaks for itself.” That it does.

The meeting was broadcast on one of the C-SPAN channels, so this isn’t exactly a secret. Only three Democrats bothered to show up at all, out of a dozen assigned to it. Republicans showed up, prepared to cast votes to finally bring the ignominious streak of 1,085 days (as of yesterday) without a budget resolution to an end. Sadly, Democrats — who control the committee, the chamber, and the White House — don’t have the same sense of responsibility.


For a party that demands that voters put them in charge, they seem utterly unwilling to do the job once they have it. Voters should keep this in mind in November, up and down the ballot. 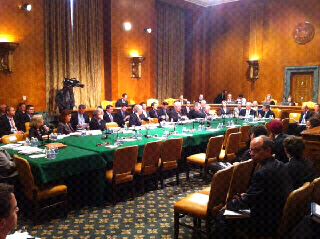 New Romney Ad: Too Many Americans