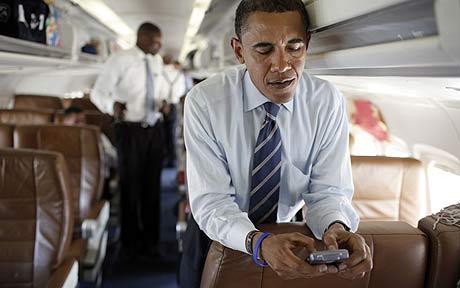 The President, whether his last name is Bush or Obama, is slowly becoming that one girlfriend we’ve all had that you just can’t get rid of.  If he’s not stalking you through NSA surveillance programs or harassing you through the IRS, he’s now sending you text messages in the middle of the night … and you can’t do anything to block him.

AT&T has begun rolling out Wireless Emergency Alerts updates for iPhone 4S and 5, so you won’t be the last folks to know if the entire northern hemisphere is about to be covered in ice à la Day After Tomorrow.

You’ll receive a notification from the carrier when your update is ready, but only if you’re using iOS 6.1 or higher.

Once installed, AMBER and Emergency alerts are automatically sent to your phone unless you switch them off via Settings. However, should you be tired of Obama, just know that there’s no way to switch off Presidential alerts.

Presidential alerts as defined by AT&T are simply “alerts issued by the President”.  And it is that vague description that makes one wonder exactly what they’ll be receiving.  Messages to sign up for food stamps?  A simple “Hope and Change” text?  Or just a friendly reminder that he’s still watching you?

As with the other big brother programs, this is not a new concept and was begun during the Bush presidency.  The use of Presidential alerts began with the Warning, Alert and Response Network Act, passed in Congress in 2006.

Don’t be bitter with Apple, though.  This is simply a software update for the iPhones in particular, and is pretty much SOP for any WEA-enabled mobile devices.

Report: Obama and the Media Helped ISIS Leader Escape in 2015

Clinton Plugs Her Book When Asked About Bergdahl/Taliban Trade