Well this seems mildly inappropriate for a presidential campaign website.

It is an e-card with a woman’s image and an attached caption which reads, “Vote like your lady parts depend on it.”

And a comment which accompanies the image states, “because they kinda do.” 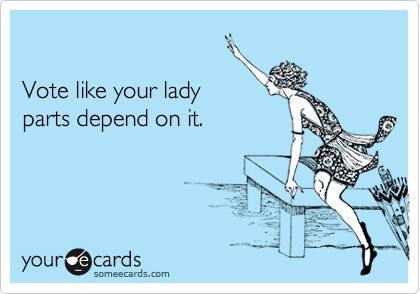 You know, because the Republican war on women extends to banishing and/or controlling your lady parts.

Here is the description of the campaign site:

This is the Obama 2012 campaign’s official home on Tumblr. Have a story, photo, or video you’d like to share here? Go ahead and submit it today.

If this were on Romney’s campaign website, it’d be plastered all over the media.  But not so for the Obama campaign, where you will hear nary a peep from mainstream journalists.

The childish attempt at humor would seem to be beneath the dignity of the President, but then we’ve learned that little is actually beneath the moral character of this administration.

UPDATE:  The campaign has scrubbed the image from their website.