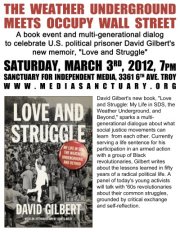 Occupy Albany has announced an event in March called, The Weather Underground Meets Occupy Wall Street.  The event will be held March 3rd, and is co-sponsored by The Sanctuary For Independent Media and the Albany Social Justice Center.  It is described as, “A book event and multi-generational dialog to celebrate U.S. political prisoner David Gilbert’s new memoir, “Love and Struggle.”

Gilbert is currently serving time in the Auburn Correctional Facility and is described as “an American radical leftist organizer and activist.”  He was imprisoned for his role in the Brinks Robbery of 1981, a botched effort that led to the murder of four people, including a security guard and two police officers.

Interestingly, Gilbert sounds strikingly similar to the Occupy protesters of today when he describes his actions during the robbery.  In an interview in 1985, he described the scene as such:

“It was an attempted expropriation. That means taking money from those who amassed wealth by exploiting the people and using that money to finance the resistance.”

Justifying the killing of innocent people, and sugarcoating armed robbery by calling it ‘expropriation’.  How Occupy of him.

And now according to their Facebook posting, and in support of Gilbert’s efforts, Occupy Albany will be participating in the so-called ‘book event’.  Participants are also shilling for his new book. 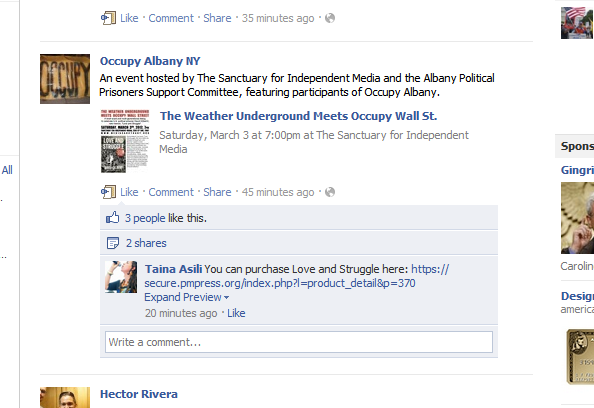 The full description of events reads (emphasis mine):

David Gilbert’s new book, “Love and Struggle: My Life in SDS, the Weather Underground, and Beyond,” sparks a multi-generational dialogue about what social justice movements can learn from each other. Currently serving a life sentence for his participation in an armed action with a group of Black revolutionaries, Gilbert writes about the lessons learned in fifty years of a radical political life. A panel of today’s young activists will talk with ’60s revolutionaries about their common struggles, grounded by critical exchange and self-reflection.

So the Occupy movement is getting together to discuss common struggles with ’60s revolutionaries from the Weather Underground.  Problem being, the Weather Underground, you may have heard, were not revolutionaries – they were terrorists.  This is what the Occupy Wall Street movement is coming together for, to celebrate terrorist acts that they see parallels in?

One individual who has also heaped praise on Gilbert’s new book is Bill Ayers, former member of the Weather Underground, man who helped launch the first campaign of our current President, and unrepentant terrorist.  Ayers took part in a series of bombings in the 1970s that killed three activists.  The intent was much worse however, as the bombings were designed to kill army officers in New Jersey – It accidentally exploded in a New York townhouse.


Lest we forget that in regards to the day he successfully bombed the Pentagon, Ayers said, “Everything was absolutely ideal. … The sky was blue. The birds were singing. And the bastards were finally going to get what was coming to them.”

And of course, there is William’s mantra to “Kill all the rich people. … Bring the revolution home. Kill your parents.”
More famously, in an article that appeared in the New York Times on September 11th, 2001, Ayers was quoted as saying that he did not regret setting bombs and, “I feel we didn’t do enough.”
Of course, none of this comes as much of a surprise.  A few weeks ago, Occupy Albany participants were actively wondering why they hadn’t begun emulating clashes in Syria, in which over 35 people had been killed amidst reports of ‘blood being shed.’
Is this really where the Occupy Wall Street movement is headed?  Is this an element they long to be associated with?
Sympathizing with known murderers and terrorists because they share ‘common struggles’ is a scary, scary sign.
Tags
Occupy Albany Occupy Wall Street Terrorist