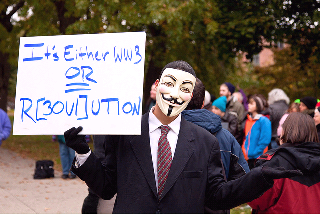 In scanning through the activities of the day involving Occupy Albany, you typically find harmless actions from a juvenile collection of attention whores.  Take for instance the recent ‘die-in’ that protestors staged at the Albany Department of Environmental Conservation.  The Legislative Gazette reports:

Protestors acted out a scene in which they pretended to drink water, contaminated by hydrofracking fluids, and proceeded to pass out and “die” on the floor, blocking one of the front entrance doors. After five minutes, the protestors “revived” themselves and emerged as “frackingstein” monsters. Within half an hour, most Occupy Albany participants had left the scene.

The only logical response to people referring to themselves as ‘frackingstein monsters’ is this:

Then there’s Tim, an active Occupy Albany protestor who took place in the symbolic die-in.  You say you want a what? 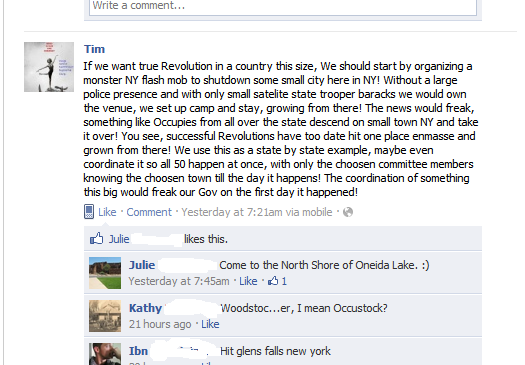 Is it just big talk from another Occupy drama queen?

Perhaps, but Holmes takes it to a scary level in a more recent post: 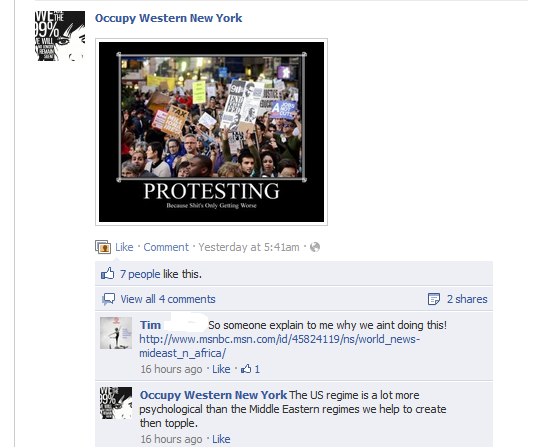 What is Tim complaining about?  What is it that Occupy Albany is not doing?

Clicking on the link brings you to an MSNBC article with this title:

Arab League monitor tells protesters at mosque: ‘Our goal … not to remove’ Assad but vows to report ‘blood being shed’

The report goes on…

Clashes erupted in Syria on Friday as activists estimated that 500,000 protesters filled the streets to demonstrate against the government of President Bashar Assad, while Arab League officials continued monitoring the situation on the ground.

At least two dozen were injured in the Damascus suburb of Douma, activists said. One report said army defectors in Douma were engaged in armed clashes with troops. There were no further details.

“From what I have heard there is blood being shed,” an observer said. “That is for sure.”

Notice that despite the ridiculous and possibly threatening question being posed by Tim, the Occupy Western New York group does not denounce his question.