Champion of the people, Barack Obama, the man who railed against rich people during his entire two terms as President, was recently seen vacationing on a yacht with the likes of Hollywood actor Tom Hanks and Oprah Winfrey.

How does one square this with allegedly being for the common folk, a man of the poor and middle class? Well, you don’t. It’s hypocrisy at it’s absolute finest.

lets get Obama, Oprah, Bruce Springsteen & Tom Hanks to ask David Geffin as soon as they get done partying on his yacht. pic.twitter.com/CwW7omS1QE

If the hypocrisy doesn’t simply jump out at you, then perhaps this helpfully labeled image will better explain what is going on here. 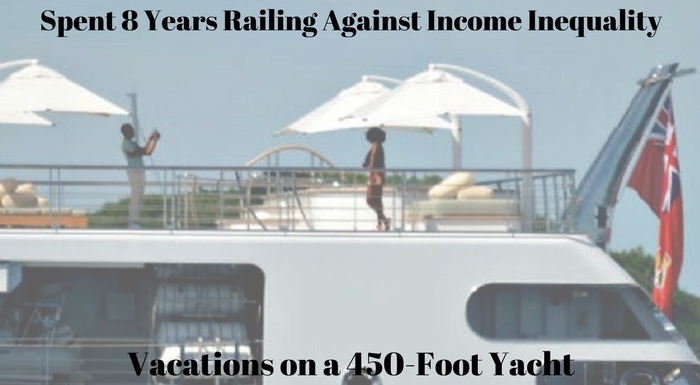 Well, we know how socialist Bernie Sanders feels about yachts and rich people:

How many yachts do billionaires need? How many cars do they need? Give us a break. You can't have it all.

The former President also claimed prior to leaving office, that he wasn’t headed to Wall Street … but recently accepted a $400,000 speaking engagement.

Some in the media are freaking out that former President Obama will be giving a speech to Wall Street in September. It makes for a nice payday: $400,000. The Washington Post pleaded with the president to rethink this decision, noting that it would be hypocritical due to Obama’s mostly anti-Wall Street rhetoric during his presidency. Moreover, it would only give Democrats more grief, with yet another party heavyweight cuddling up to Wall Street. They had one presidential campaign sunk partially due to the optics of paid speeches. Does Obama want to go down the same path and exacerbate the divide between the two wings of the party led by Sen. Bernie Sanders (I-VT) and DNC chair Tom Perez?

At Vox, Matt Yglesias warned that the $400,000 speech will “undermine everything he [Obama] believes in.”

Obama is the same man who said, “I mean, I do think at a certain point you’ve made enough money.”

Only a principled anti-capitalist could say such a thing. And Obama’s clearly not principled in any manner.