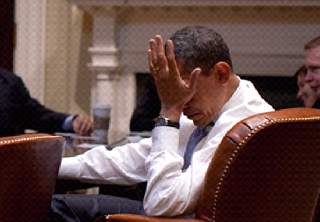 Just kidding!  The budget, which featured major tax increases while still adding trillions to the deficit, was defeated in the House by a margin of 414-0.

From the Washington Times:

President Obama’s budget was defeated 414-0 in the House late Wednesday, in a vote Republicans arranged to try to embarrass him and shelve his plan for the rest of the year.


The vote came as the House worked its way through its own fiscal year 2013 budget proposal, written by Budget Committee Chairman Paul D. Ryan. Republicans wrote an amendment that contained Mr. Obama’s budget and offered it on the floor, daring Democrats to back the plan, which calls for major tax increases and yet still adds trillions of dollars to the deficit over the next decade.


“It’s not a charade. It’s not a gimmick — unless what the president sent us is the same,” said Rep. Mick Mulvaney, a freshman Republican from South Carolina who sponsored Mr. Obama’s proposal for purposes of the debate. “I would encourage the Democrats to embrace this landmark Democrat document and support it. Personally, I will be voting against it.”


But no Democrats accepted the challenge.

The budget is actually a gimmick – on the part of the President.  The proposal was submitted in an attempt to placate his left wing base.  He knew it would never be considered as a serious budget proposal, but now he can go back to his Occupy/Union goon base and say, ‘See?  I tried to raise taxes.  I tried to increase spending.  And those DC insiders wouldn’t let me.’

Sad part is, his unthinking liberal followers will buy it even though his Democrat cronies in Washington did not.