President Obama gave a speech in Roanoke, Virginia yesterday, where the heat and a tightly packed area caused over 20 supporters to pass out.

The pool report on President Obama’s trip to Roanoke, Virginia says that more than 20 people fainted during the president’s speech this evening.

“TV viewers may have heard POTUS pointed out a couple of faintings during the rally in downtown Roanoke,” writes the pool report. “In fact, fire officials say more than 20 people fell out during the course of the speech. There were waves of exclamation as one person after another swooned.”

Paramedics treated 21 people on the scene and took one to the hospital, according to the Roanoke fire department.

It was warm out and the crowd of 3,000-plus was packed tightly into the 4-block area, the deputy fire marshal said by way of explanation. Volunteers passed around cups of water but some people didn’t take them, he said.

Of course, the most intelligent President of our time then offered this advice to the stricken… 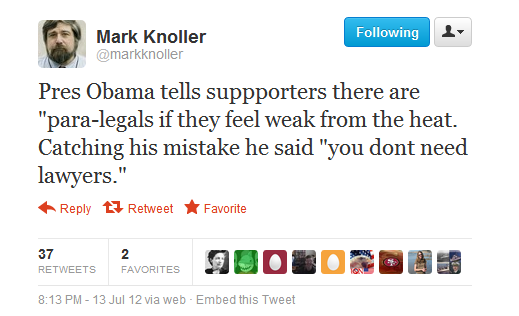 I’m assuming the team of paralegals was on hand to read and interpret the 2700+ pages of Obamacare to see if these people would be covered in the event they actually needed a paramedic.