David Axelrod made an appearance on Fox News this morning with Chris Wallace, and went above and beyond the call of duty in trying to spin his way out of answering a serious question.

Wallace asked, “David, can you honestly say that the average American is better off today than they were four years ago?”

Watch as Axelrod dances around the question…

Wallace rightly points out that he’s asking Axelrod about Obama’s record, not Romney’s, and asks the question a second time.  He avoids it once again, despite being provided this helpful, yet damning graphic… 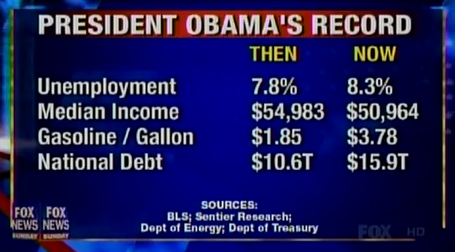 The question is rhetorical.  The answer is of course, no – the American people clearly aren’t better off than they were four years ago.
Was that so hard?
Tags
Mitt Romney President Obama Unemployment

Report: Feds May Prohibit Veterans From Owning a Gun