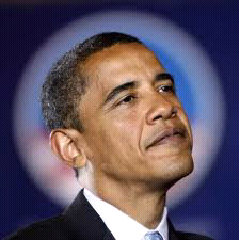 We knew the President was a classic case of narcissism wrapped up in a pretty pink bow, but he may have reached the apex of his self-absorbed career with this one.

The White House website, as most know, features biographies of all past Presidents of the United States.  Apparently, several former Presidents have had their biographies modified, with many accomplishments now sporting the addition of how Obama himself has either achieved the same level of greatness, or has somehow carried the torch.

This is a borderline cry for help.  Why does the President of the United States find it necessary to seek approval by rewriting history, and wedging himself into the conversation?

Many of President Obama’s fervent devotees are young enough not to have much memory of the political world before the arrival of The One. Coincidentally, Obama himself feels the same way—and the White House’s official website reflects that.

The Heritage Foundation’s Rory Cooper tweeted that Obama had casually dropped his own name into Ronald Reagan’s official biography on www.whitehouse.gov, claiming credit for taking up the mantle of Reagan’s tax reform advocacy with his “Buffett Rule” gimmick. My first thought was, he must be joking. But he wasn’t—it turns out Obama has added bullet points bragging about his own accomplishments to the biographical sketches of every single U.S. president since Calvin Coolidge (except, for some reason, Gerald Ford).

Here is an example in the case of Coolidge (emphasis mine):

First reaction upon hearing this was similar to the author’s – it has to be a joke.  This is so beneath the President’s office that it simply cannot be true.  Sadly it is, and sadly, we’re learning that there isn’t much that can be considered beneath this President.

Judge Jeanine Lectures NFL and Roger Goodell: ‘Shame on All of You!’