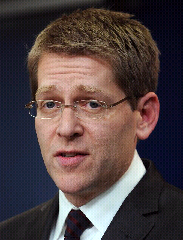 Maggie over at Thurber’s Thoughts has a fantastic piece on what she originally calls a spin job by the administration.  But hearing Jay Carney tell the American people that President Obama did not reject the Keystone pipeline isn’t spin.

It’s, as she concludes, an out-and-out lie.

This is an administration so arrogant that they actually believe they can look directly into the camera and lie to the American people.  They are banking on you not knowing any better.  And if you’re not offended or outraged no matter your view on the Keystone pipeline project itself, then you have relegated yourself to a life of government servitude, an acceptance of administration lies, a repeat of the epic mistake our country made in 2008 – or your just too damn lazy to care anymore.

I suppose that the job of White House Press Secretary Jay Carney is to spin the actions of President Barack Obama in a favorable light. But out and out lies, unchecked by the media, are beyond what Americans should expect – especially with an economic project as critical as the Keystone Oil Pipeline.

Real Clear Politics reports that in yesterday’s press briefing, Carney was spinning away:

“In terms of Keystone, as you all know, the history here is pretty clear. And the fact is because Republicans decided to play political with Keystone, their action essentially forced the administration to deny the permit process because they insisted on a time frame in which it was impossible to completely approve the pipeline,” Carney said when asked about the pipeline by ABC News’ Jake Tapper.

As Maggie points out, the pipeline has been under consideration for three years.  It isn’t a new project that just snuck up on the President.  The deadline imposed by Republicans was something that Obama actually forced, having dragged his feet for so long.

And when Carney whines about not having enough time to review – during that three year span the project was approved by 10 government agencies already, including the environment-bound EPA!