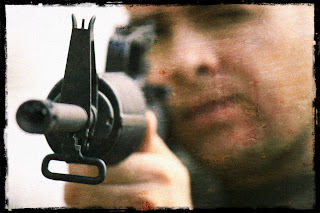 Remember when Sarah Palin’s target lists were blamed for the tragic shooting in Tucson, Arizona that resulted in Rep. Gabrielle Giffords being shot?  Major media outlets were drawing a link to the shooting and the maps Palin used, which featured cross hairs over districts she felt could be won.  Of course, this led to President Obama giving a speech about partisan politics and the need for a ‘new tone’ in political discourse, despite the fact the shooting had no political motivations.

In a piece titled, Obama Calls for a New Era of Civility in U.S. Politics, the New York Times reported:

President Obama offered the nation’s condolences on Wednesday to the victims of the shootings here, calling on Americans to draw a lesson from the lives of the fallen and the actions of the heroes, and to usher in a new era of civility in their honor.

The president directly confronted the political debate that erupted after the rampage, urging people of all beliefs not to use the tragedy to turn on one another. He did not cast blame on Republicans or Democrats, but asked people to “sharpen our instincts for empathy.”

Apparently the President has forgotten his own advice, leaving civility behind a mere month after the tragic mass shooting in Newtown, Connecticut.  If somebody somewhere in America, is killed with a gun over the next few days, and that person just happens to be a Republican, will the President receive equal blame in the media?

In the midst of a heated American debate about gun control and a gun’s role in such shootings, Obama compared GOP tactics regarding a completely detached topic – the raising of the debt ceiling  – to somebody holding a gun to another person’s head.

Politico reported Monday House Republicans are “seriously entertaining” measures that include default or government shutdown to achieve some kind of spending cuts in the upcoming debt ceiling negotiations.

Obama, who voted against increasing the debt ceiling as a senator in 2006, compared—at length—the debt ceiling negotiations to dining and dashing. The president also compared Republican tactics to holding “a gun at the head of the American people” one month after the mass shooting in Newtown, Conn.

“What I will not do is to have that negotiation with a gun at the head of the American people,” Obama said. “The threat that unless we get our way, unless you gut Medicare or Medicaid or, you know, otherwise slash things that the American people don’t believe should be slashed, that we’re going to threaten to wreck the entire economy.”

If Republicans are being accused of such tactics because they don’t wish to unilaterally raise the debt ceiling, does that mean that Obama’s vote in 2006 also equates to him holding “a gun at the head of the American people”?

Doesn’t that make Obama a terrorist?

Democrat Lawmaker Says 20,000 Jobs is Not That Many