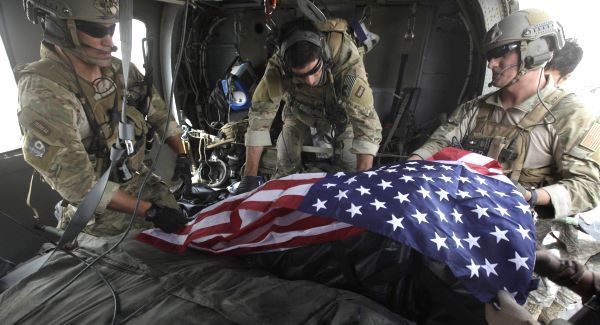 In case you were wondering, according to the Pentagon, American troops would be killed far less frequently if only they would better understand the religious sensitivities of Afghan forces.

If you’re an ardent supporter of American media, then you probably missed the news that the number of U.S. soldiers killed in Afghanistan rose to 2,000 this past weekend.

This of course, would have been the lead story on every news outlet in America had it occurred between the years 2000 and 2008.

But this is now Obama’s war, and there should be no reporting of significant milestones because … well … because he has put an end to these unjust wars.  And also, he’s the first black President.  Or something.

Regardless, here is the grim news as reported by the Huffington Post:

A firefight broke out between U.S. forces and their Afghan army allies in eastern Afghanistan Sunday, killing two Americans and three Afghan soldiers and pushing the number of U.S. troops killed in the long-running war 2,000.
The fighting started Saturday when what is believed to have been a mortar fired by insurgents struck a checkpoint set up by U.S. forces in Wardak province, said Shahidullah Shahid, a provincial government spokesman. He said the Americans thought they were under attack from a nearby Afghan army checkpoint and fired on it, prompting the Afghan soldiers to return fire.
The Afghan Defense Ministry said the gunbattle was the result of a “misunderstanding” between international forces and Afghan soldiers manning a checkpoint in the Sayd Abad district.

There is a debate as to whether or not this story holds true.  Were our soldiers killed as a result of a misunderstanding, or was it an attack from within?  Regardless of the motive, the 2,000th American soldier has died in Afghanistan.

Now, we know our readers are pretty good with math unlike liberals in the media, so we have a little mathematical riddle for you – If 630 U.S. troops were killed in 8 years during the war in Afghanistan under Bush, and 2,000 total troops have died during the entire length of that war, how many casualties have occurred under President Obama?

Here’s an even more astounding thing to ponder – the Obama administration is now blaming the ‘friendly fire’ attacks that have killed U.S. soldiers this year on troops that are not sensitive enough to the religion of Islam.

In other words, they had it coming.

Afghan security forces, our supposed allies, are slaughtering American troops. Thirty-three soldiers have been killed by “green on blue” attacks this year alone. The situation is so bad that the training of Afghan forces has been temporarily suspended.

How has the Pentagon responded?

By blaming our troops.

Top officials believe culturally offensive behavior is the motivation behind the killings, so it’s stepped up Islamic sensitivity training for our troops.

If you don’t want to be shot in the back by your Afghan training partners, the Pentagon advises, don’t offend their religious sensibilities. Don’t kick your feet up on a table, for instance, and never ask to see a picture of their wives and kids. “There’s a percentage [of attacks] which are cultural affronts,” Joint Chiefs Chairman Gen. Martin Dempsey said in a recent interview. Dempsey echoes the concerns of Gen. Sher Mohammad Karimi, the Afghan National Army’s chief of staff, who earlier this month argued both sides need to do more to “teach” foreign troops Islamic traditions and values to reduce the chance of violent reactions to cultural slights. “It is our duty to teach this to them. Our indifference about these issues causes the incident,” he said.

Of course, this fits in quite well with the President’s view that when it comes to soldiers and diplomats being killed abroad, everyone is to blame for their deaths except for the people who actually pull the trigger.

When do you suppose the Obama administration will start training Afghan troops to respect American traditions and values, and start blaming violence in the Middle East on those who have no values?