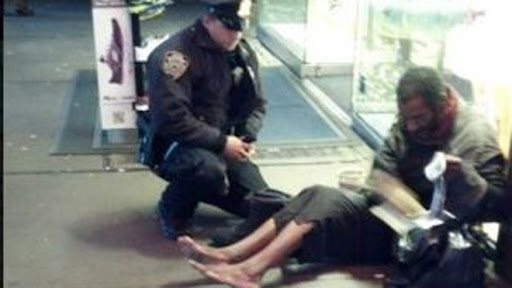 Nice to have a feel-good story every once in a while.  And this one is pretty damn good…
Via Fox News:

An NYPD officer’s act of kindness has gone viral on Facebook.

Jennifer Foster, a Florence, Ariz., tourist, posted a photograph of the officer giving a homeless man a pair of boots and socks on a frigid night in Times Square on Nov. 17.

The image became an instant hit on the NYPD’s Facebook page. More than 308,861 users “liked” his generosity as of Thursday morning.

Newsday identified him as Larry DePrimo of Holbrook, Long Island. He’s assigned to the 6th Precinct in Manhattan.

The homeless man said he’d never had a pair of shoes. DePrimo purchased a pair of insulated boots and thermal socks and put them on the man’s feet.

DePrimo said the man “smiled from ear to ear. It was like you gave him a million dollars.”

Thanks for the reassurance in the kindness of humanity,  Officer DePrimo.
Tags
New York

Perino Rips Sharpton: Americans Have Been Subsidizing His Lifestyle