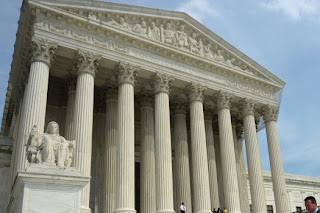 Some call it a backing of affirmative action policies, while others call it a full-throated endorsement of discrimination.  Regardless, 13 attorneys general, led by New York’s own Eric Schneiderman, have filed a brief urging the U.S. Supreme Court to uphold racial preferences in college admissions.

The court is scheduled to hear arguments Oct. 10 in a lawsuit by Abigail Fisher, a white student who was not admitted to the University of Texas in 2008. Fisher is challenging the university’s admissions policy as a violation of her civil and constitutional rights.

The court’s ruling will be its first on affirmative action in higher education since 2003.

“The states all share a strong interest in preserving the flexibility of their varied institutions to pursue a range of strategies to achieve the educational benefits of diversity in higher education,” Schneiderman and state Solicitor General Barbara Underwood said in a brief filed late Monday. They noted that public schools like the State University of New York, ranging from community colleges to research universities, enroll about 72 percent of post-secondary students nationally and play an especially important role for students with modest means.

The Justice Department has argued that a diverse college population is not only in the best interest of the university, but also the government’s.  But the tactics in which a college attains that diversity is what is in question, as the University of Texas had shifted from accepting students based on class rank, to finding other ways to diversify the student population.  In other words, some students who may have been accepted based on academic performance would now compete with others who may have been chosen based on better personal essays or on their extracurricular merits – and with race in mind.

The brief (provided below) is very similar to one filed in 2010 with the Fifth Circuit Court of Appeals, also supporting the University of Texas’ use of racial preferences in their undergraduate admissions process. The brief had been filed by then solicitor general and current Justice, Elena Kagan, and stems from the same battle begun in the 2003 ruling that narrowly permitted race-conscious policies in public higher education.

Such blatant support for the exploitation of race in education was panned by the National Review’s Roger Clegg, when he described the brief as “a full-throated endorsement of such discrimination.”

The Supreme Court’s review of this affirmative action case may have political ramifications as well.  The review is expected to occur in October—placing it squarely in the minds of voters just weeks prior to the presidential election.