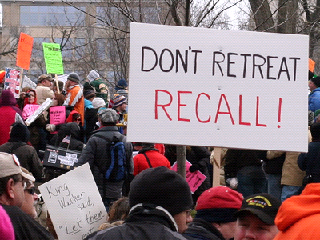 Twenty-five journalists with the Gannett media group in Wisconsin signed a petition calling for the recall of Republican Gov. Scott Walker, according to a Green Bay newspaper where some of those journalists work.


Kevin Corrado, publisher of the Green Bay Press-Gazette, disclosed the actions of Gannett Wisconsin Media employees in a recent column and said they are facing disciplinary action.


“It was wrong, and those who signed the petition were in breach of Gannett’s principles of ethical conduct,” Corrado wrote.

“The journalists’ instincts, if not their training, should have kicked in, warning them not to get personally involved.

Corrado seems to be confused.  It’s precisely because of their instincts and training as journalists that they got involved.  Such is the state of media today.

Check out the rest here…

Who Better to Lead Us to Energy Independence Than Abraham Lincoln?