A man has been convicted of illegally voting in a Kansas election after pleading guilty to voter fraud.

Victor David Garcia Bebek, a Peruvian national, voted three times, once in a special election in 2012, and twice more in general elections in 2012 and 2014.

According to a statement from Kansas Secretary of State Kris Kobach, Bebek will be on unsupervised probation for up to three years and pay a fine of $5,000.

Via the Kansas City Star:

Kansas Secretary of State Kris Kobach said Wednesday that he has obtained his first conviction of a person who illegally voted in a Kansas election without being a U.S. citizen.

Kobach, a Republican, is the only secretary of state in the country with the authority to prosecute voter fraud.

Bebek’s illegal votes were discovered because he tried to register after actually becoming a U.S. citizen earlier this year. Officials processing that registration discovered he was already on the rolls, and had already voted.

“No matter how many cases we prosecute the political left will always whine that there’s not enough cases to justify protecting our elections in this way,” Kobach told the Kansas City Star. “That’s absurd.”

Like clockwork, Dem Rep. John Carmichael responded to the conviction by saying, “I’m not at all convinced that finding one non-citizen to prosecute after a two-year search justifies giving the secretary of state what is unprecedented authority” to prosecute voter fraud.

That’s because Democrats don’t want you to know that voter fraud is a very real thing.

MSNBC Host Humiliates Herself When She Mistakes Common Sound For Gunfire

‘Let’s Play Strip Poker’: Former Cuomo Staffer Accuses Him Of Kissing Her Without Her Consent

Elizabeth Warren Believes ‘Credible and Convincing’ Biden Over His Accuser 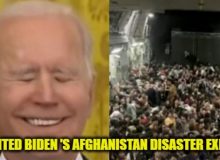