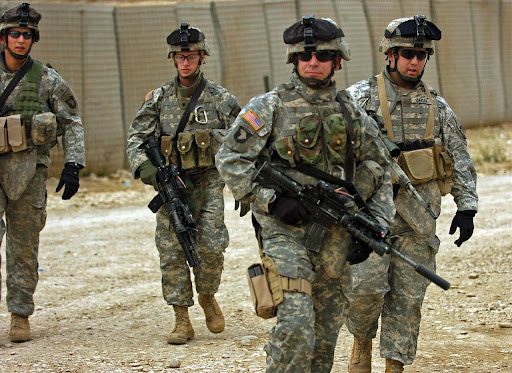 Remember when American troops could simply intimidate their enemies into backing down?
Not now.  Not with today’s new politically correct army manual, which instructs troops that they can’t so much as criticize their battlefield enemies.
Via Judicial Watch (h/t Weasel Zippers):

Here is a strong indicator that the Obama Administration’s crusade to appease Islam has gone too far; a  new U.S. military handbook for troops deployed to the Middle East orders soldiers not to make derogatory comments about the Taliban or criticize pedophilia, among other outrageous things.

It gets better; the new manual, which is around 75 pages, suggests that Western ignorance of Afghan culture— not Taliban infiltration—is responsible for the increase in deadly attacks by Afghan soldiers against the coalition forces.

The soon-to-be-released Army handbook is still being drafted, but a mainstream newspaper got a sneak preview and published an article that should infuriate the American taxpayers funding the never-ending war on terror. The manual is being created because someone with authority bought the theory that cultural insensitivity is driving insider attacks on U.S. troops in Afghanistan.

Was the manual written by President Obama himself?  If ever there was absolutely no place for political correctness, it would lie with those responsible for protecting U.S. interests.
What’s worse is this – soldiers are directed not to talk about “advocating for women’s rights”.
Whatever happened to the War on Women?
The President simply continues to placate our enemies, and further weaken the very country in which he serves as Commander-in-Chief.

Good News! Obamacare to Slam the Economy with $1 Trillion in New Taxes

Pastor Gives Occupiers Place to Sleep, They Steal His Laptop

Taliban Commander Turns Himself In, Tries to Collect Reward Money