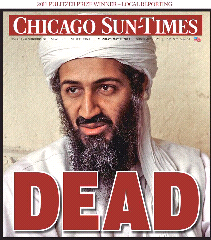 First, the ‘gutsy call’ had a fallback plan if it backfired.  The gutsy call was actually made by an Admiral McRaven, the true hero in greenlighting this operation, and the blame, if necessary, would be shouldered by him as well – not the President.

… Only the memo doesn’t show a gutsy call. It doesn’t show a president willing to take the blame for a mission gone wrong. It shows a CYA maneuver by the White House.

The memo puts all control in the hands of Admiral McRaven – the “timing, operational decision making and control” are all up to McRaven. So the notion that Obama and his team were walking through every stage of the operation is incorrect. The hero here was McRaven, not Obama. And had the mission gone wrong, McRaven surely would have been thrown under the bus.

The memo is crystal clear on that point.

And now, several members of the elite Navy SEALs have taken umbrage to the President’s attempts to take credit for the kill.

Serving and former US Navy SEALs have slammed President Barack Obama for taking the credit for killing Osama bin Laden and accused him of using Special Forces operators as ‘ammunition’ for his re-election campaign.

The SEALs spoke out to MailOnline after the Obama campaign released an ad entitled ‘One Chance’.

In it President Bill Clinton is featured saying that Mr Obama took ‘the harder and the more honourable path’ in ordering that bin Laden be killed. The words ‘Which path would Mitt Romney have taken?’ are then displayed.

Here is a sampling of what the SEALs had to say regarding Obama’s role:

Ryan Zinke, a former Commander in the US Navy who spent 23 years as a SEAL and led a SEAL Team 6 assault unit, said: ‘The decision was a no brainer. I applaud him for making it but I would not overly pat myself on the back for making the right call.“

A serving SEAL Team member said: ‘Obama wasn’t in the field, at risk, carrying a gun. As president, at every turn he should be thanking the guys who put their lives on the line to do this. He does so in his official speeches because his speechwriters are smart.”

And then there is this…

Chris Kyle, a former SEAL sniper with 160 confirmed and another 95 unconfirmed kills to his credit, said: ‘The operation itself was great and the nation felt immense pride. It was great that we did it.’

‘But bin Laden was just a figurehead. The war on terror continues. Taking him out didn’t really change anything as far as the war on terror is concerned and using it as a political attack is a cheap shot.‘

‘In years to come there is going to be information that will come out that Obama was not the man who made the call. He can say he did and the people who really know what happened are inside the Pentagon, are in the military and the military isn’t allowed to speak out against the commander- in-chief so his secret is safe.’

It is clear that the man who once refused to ‘spike the football’ on the bin Laden killing, is now doing an endzone celebration in an attempt to divert America’s eyes away from the economy, away from the debt, and away from his failures as a President.

Worse, Obama is taking an event that should galvanize the nation in their pride, that demonstrates our military’s strength and resolve in avenging the tragedy of 9/11, and making it all about him.

But that’s what narcissists do.

Real leaders?  This is what a real leader does…

Here is a summary of Obama’s speech in announcing the death of bin Laden.  See if you can spot a theme…

By contrast, take a look at the speech given by George W. Bush regarding the capture of Saddam Hussein.

Good afternoon. Yesterday, December the 13th, at around 8:30 p.m. Baghdad time, United States military forces captured Saddam Hussein alive. He was found near a farmhouse outside the city of Tikrit, in a swift raid conducted without casualties. And now the former dictator of Iraq will face the justice he denied to millions.

The capture of this man was crucial to the rise of a free Iraq. It marks the end of the road for him, and for all who bullied and killed in his name. For the Baathist holdouts largely responsible for the current violence, there will be no return to the corrupt power and privilege they once held. For the vast majority of Iraqi citizens who wish to live as free men and women, this event brings further assurance that the torture chambers and the secret police are gone forever.

And this afternoon, I have a message for the Iraqi people: You will not have to fear the rule of Saddam Hussein ever again. All Iraqis who take the side of freedom have taken the winning side. The goals of our coalition are the same as your goals — sovereignty for your country, dignity for your great culture, and for every Iraqi citizen, the opportunity for a better life.

In the history of Iraq, a dark and painful era is over. A hopeful day has arrived. All Iraqis can now come together and reject violence and build a new Iraq.

The success of yesterday’s mission is a tribute to our men and women now serving in Iraq. The operation was based on the superb work of intelligence analysts who found the dictator’s footprints in a vast country. The operation was carried out with skill and precision by a brave fighting force. Our servicemen and women and our coalition allies have faced many dangers in the hunt for members of the fallen regime, and in their effort to bring hope and freedom to the Iraqi people. Their work continues, and so do the risks. Today, on behalf of the nation, I thank the members of our Armed Forces and I congratulate ’em.

I also have a message for all Americans: The capture of Saddam Hussein does not mean the end of violence in Iraq. We still face terrorists who would rather go on killing the innocent than accept the rise of liberty in the heart of the Middle East. Such men are a direct threat to the American people, and they will be defeated.

We’ve come to this moment through patience and resolve and focused action. And that is our strategy moving forward. The war on terror is a different kind of war, waged capture by capture, cell by cell, and victory by victory. Our security is assured by our perseverance and by our sure belief in the success of liberty. And the United States of America will not relent until this war is won.

A speech about Iraq and America, but not about him.