His story about being a Navy SEAL wasn’t so fishy after all.

The Virginia man arrested for gun possession in Manhattan Thursday and thrown in a psych ward when he claimed to be a member of the elite military unit but couldn’t provide proof was telling the truth, The Post has learned.

Shaun Day, 29, was on a two-week leave when cops harpooned him for running a red light at 12:30 a.m. at Second Avenue and East 26th Street.

When cops searched his pickup truck, they discovered a 9mm semiautomatic and three ammunition clips.

During the arrest, Day was rambling incoherently and harped that he was a SEAL —but had no proof for cops.

All kidding aside, let’s hope Mr. Day receives the proper care he deserves for PTSD. 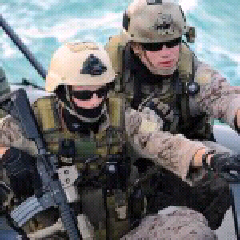 Weekend Recess: NASA – They’re Sexy and They Know It