House Speaker Nancy Pelosi and her fellow Democrats spent months lecturing Americans to take impeachment seriously. They claimed it was a matter of national security—so important, in fact, that it excused rushing a sham “investigation” through the House of Representatives.

It was the fastest impeachment in American history. And now. . . silence.

After months of saying there was no time to waste, Speaker Pelosi pumped the brakes. Rather than delivering the articles of impeachment to the Senate for trial, she’s holding onto them, refusing to name the “managers” whose job will be to make the House Democrats’ case to the Senate.

“I’ll send them over when I’m ready,” Pelosi said today.

This stunt horribly undercuts the Democrats’ case in two big ways. First, it makes a mockery of the Constitution, which unambiguously grants the Senate the “sole power to try all impeachments.” That means Senate leaders are responsible for outlining the process they’ll follow. House leaders got to use their own rules for the impeachment inquiry and vote—they don’t get to decide how the Senate does its job, too.

Second, Pelosi’s stalling confirms the doubts of both House Republicans and Democrats who voted against impeachment: There was no evidence to move forward. Not only did Democrat leaders fail to show that President Donald J. Trump broke the law; their articles of impeachment don’t even allege that he committed a crime. For the first time in history, a President has been impeached for solely political reasons.

Even Senate Democrats are finding it hard to excuse this behavior, and a growing number of them are calling on Speaker Pelosi to end the stalling. It’s easy to see why: If even Democrats can’t take their own impeachment seriously, why should anybody else?

“Send them over”: Dianne Feinstein tells Pelosi to end the delay

About the Author MenRec Staff 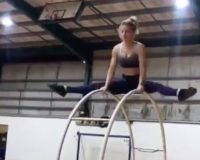 UNREAL: What This Fit Chick Can Do On A Wheel Will Blow Your [email protected] Mind!
February 28th, 2020 Clash Daily