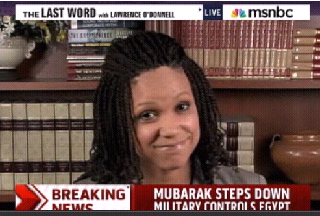 The only thing horrific is what MSNBC actually considers high-level journalism these days.

Via Mediaite (h/t The Blaze):

MSNBC Host Melissa Harris-Perry, speaking at a Washington D.C. conference on Monday, called America’s response to 9/11 “horrific racial violence” and a reaction to what Americans typically need in the wake of events like September 11th, an “imagined racial enemy.” She went on to say that Americans derive their notions of national security through how they view “whiteness” and “who are our racial enemies that are the non-whites.”

Melissa Harris-Perry, much like her uber-racist cohort at MSNBC, Al Sharpton, is a prime example of somebody so.besieged with hatred for their own country, that they actually project their blind racism onto others.  They see everything through a prism of black and white.

Watch the video below, as the above statement is only the tip of the racist iceberg.

Here’s more of a sampling…

She goes on to describe what she feels was the United States’ racial response to the attacks of 9/11:

“The other thing that happenes in that moment, I don’t want to miss this, is that a new version of what America typically needs emerges – and that is a racial enemy,” Harris-Perry said. “Americans, in part, identify who we are and who deserves what trhough our notion of whiteness and who are our racial enemies that are the non-whites.”

“The new racial enemy became not so much Reagan‘s ’welfare queen,’ who was imaginary, but instead this imagined other that is somehow Muslim, or Arab, or Sikh, or something else,” Harris-Perry continued.