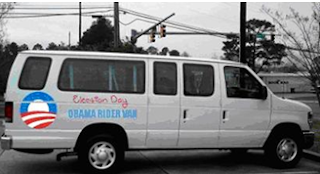 If voter fraud is not already on your radar, it should be.
As November 6thapproaches, an increasing number of concerns continue to surface at early voting centers around . Just yesterday James O’Keefe, the founder of Project Veritas, released a new shock video resulting from his latest voter fraud investigation that resulted in the resignation of Pat Moran, the field director and son of ’s Democrat incumbent Congressmen James Moran, who is seeking reelection.  Pat was caught on tape talking about how to create fake documents that would allow ballots to be cast in other peoples’ names.
Just hours before this story broke I was contacted online by a activist named Kathi Barry who recently founded a new video tracking group called Chicks with Cameraz.  Kathi was concerned about a picture she had seen on Facebook of a van that had been photo shopped with an Obama logo. What was alarming was not so much the picture, rather the comments attached:
“OBAMA WINS COLORAO! Just rented an van for Election Day! Going to pick up any voters pledged to Obama. I already have 53 pledged for the ride. I’ve also budgeted $1500 to distribute as $20 incentives to each rider. You can help by donating to the voting incentive militia. Just ask me how! Also we are holding an informational meeting on “how to vote twice” and “how to vote without citizenship” this Thursday at 5pm.”
My first thought was, “how stupid and brazen does one have to be to post this out in the open?” I shared it on my wall to see what kind of attention it would grab.  The person responsible for the post soon engaged in the thread and posted the following:
“Do you honestly think that anybody would be so overt about actual voter shenanigans? Big Bird is driving the van please don’t forget to investigate . LOL”
The more I looked into this $20 Voter Incentive Militia “campaign” the more elaborate the effort appeared to be. A Google search for “voter incentive militia” returned a website that was offline.

When it was then suggested, on the thread, that the post be reported to the authorities to investigate, the evidence started to ‘disappear.’ That’s when I thought it would be worth reporting, just to be safe. My concerns were validated five hours later when the Project Veritas story was released.  It’s been twenty-four hours since the discovery of the “$20 Voter Incentive Militia,” and the Facebook page where it originated has been deleted.
I am aware of at least four other current concerns around potential voter fraud (likely more) in the swing state of . ’s Watchdog.org has reported on twenty-four voter-fraud stories in recent months. The allegations coming from the left that voter fraud is a conspiracy theory perpetuated by “shock jocks” is clearly false and, in my opinion, a failed attempt to discredit the urgent need for stronger voter ID laws, now.
Personality traits of a cheater often amount to the guilty party accusing another of inappropriate behavior.  This has played out online with the person responsible for the $20 Voter Incentive Militia.  It has also recently been on display when Labor Union AFL-CIO, SEIU, and Maryland Rep. Cummings declared war on True The Vote (TTV), a Houston based grassroots non-profit headed by Catherine Engelbrecht.
When the findings of TTV, a citizen-led effort to restore truth, faith, and integrity to our elections, started resulting in criminal investigations into voter fraud, partisan unions panicked and stepped out of their realm of the “fair wage fight” to coordinated efforts to terrorize those volunteering for TTV to clean up the voter rolls.  AFL-CIO and the state Democrats personally threatened citizens against serving as election observers (poll watchers).  What is remarkable is that none of these left wing groups voiced any concern about the evidence of voter fraud exposed by groups like Project Veritas and True The Vote. Instead, they continue to attack them in the media and in our courts.
The verdict is not yet out on $20 Voter Incentive Militia, but it is not too late to take action. People can contact their local political party chairperson or your county clerk and recorder and ask to become an election judge or poll watcher. True The Vote can try to connect those who register on their website, just the same.  In the swing state of , two of the larger counties, and , are still placing calls to action for help.
It’s time to step up and take action! #TrueTheVote
Tags
2012 Election Colorado President Obama Voter Fraud

Are Republicans Set to Cave on Tax Hikes?