Jacob Volkmann is a mixed martial arts fighter who also works as an assistant wrestling coach at the White Bear Lake School District in Minnesota.

Recently, Volkmann cracked an obvious joke about President Obama.  A relatively tame joke at that.

The lesson the school decided to teach their kids?  Exercise free speech and you may pay a price.  Volkmann has been suspended from his job.

Fox News has reported on the overreaction…

Jacob Volkmann, 31, of White Bear Lake, Minn., said he was placed on paid administrative leave on Friday by the White Bear Lake School District after he invited Obama to make an appointment with him for a “glass-ectomy” on Dec. 30.

“A glass-ectomy is when you cut your belly button out and put a piece of glass in there so when you have your head up your butt you can see where you’re going,” Volkmann told a reporter following his victory over Efrain Escudero at UFC 141.

If anything, Volkmann should be sent to a comedy club to work on his material.  The joke is terrible.

“That sounds more like a vulgar remark than a threat, at least on the surface,” Policinski said of Volkmann’s “glass-ectomy” comment. “The First Amendment doesn’t mandate civility, even though we may wish it did. One person’s vulgarity is another person’s off-handed remark.” 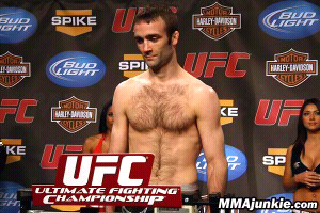