Mitt Romney has now won two states in a row, the first time we’ve seen that during the GOP primaries.  It appears Gingrich will come in second, followed by Paul and then Santorum.

Declaring victory in Nevada’s Republican presidential caucuses on Saturday, Mitt Romney again turned away from his GOP rivals and toward President Barack Obama.

CNN projected that Mitt Romney will win the Nevada Republican presidential caucuses based on results and entrance polling.

With 43% of the vote in, Romney held about 43% of the vote while former House Speaker Newt Gingrich had 25% and Rep. Ron Paul had 19%. Former Pennsylvania Sen. Rick Santorum, who had largely bypassed the state, had 12% of the vote. Those numbers were gathered from vote counters at caucus sites across the state and the state’s Republican Party.

Romney thanked supporters at his campaign headquarters in Las Vegas, telling them that, “This isn’t the first time you gave me your vote of confidence, but this time I’m going to take it to the White House,” alluding to his win in Nevada in 2008.

While it is no surprise that Romney has done well in Florida and Nevada, it is a surprise that the former Speaker of the House keeps getting baited into petty squabbling every time he seems to be making a move.  Newt is flailing right now, and he needs to stop blaming everybody and everything for his losses – including Mormons and money this time.

Trending: Report: Bloomberg Tried to Silence Journalist Who Reported on His Relationship With Chinese Communist Party

Hey, it’s one thing for bloggers to speculate the reasons for Gingrich’s loss in Nevada (I had mentioned previously that Nevada has a heavy Mormon population), but it’s another for Newt to analyze it in this manner.  It shows an immaturity in his campaigning – surprising for a man in the political game for most of his life – and it shows voters how he would act toward adversity in the Presidential campaign, or even as President.

At one point, Newt complained about being outspent by Romney at a rate of 5-1, and then turned around and said Romney would struggle in the general election because he’d be unable to outspend Obama at that rate.

Look within, Newt.  By that reasoning, if you can’t beat Romney because of his money, then you have even less of a chance going up against Obama.

The Other McCain writes:

Gingrich is neither helping himself nor hurting Romney with these attacks, and Romney is ignoring Newt the nuisance: “In three campaign appearances Friday, Romney did not even mention Newt Gingrich.”

He is also dead on in this analysis:

Every candidate believes he is best qualified to defeat Obama, or else he wouldn’t be running. There are surely Republicans out there who believe that the GOP lost its best chance to beat Obama when Michele Bachmann or Rick Perry dropped out. But public doomsaying by candidates during the primary campaign is best avoided.

Gingrich has surged every time he has focused his attacks either on Obama, or Obama’s cohorts in the liberal media.  But it is disconcerting to see that Gingrich is so easily led off message every time he faces adversity.

There’s something to be said for looking Presidential.  And right now, Mitt fits the role.

Can you say something nice about Michael Bloomberg? If you can, here’s $2,500
February 20th, 2020 Liberty Unyielding 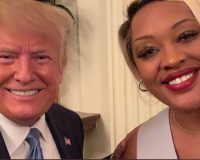 The Inside Story of Trump’s Pardon of Angela Stanton-King
February 20th, 2020 Clash Daily