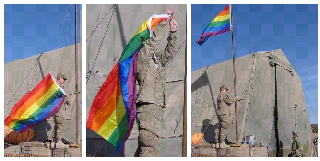 From a site called – I kid you not – Unicorn Booty:

Nicole Jodice’s sweet, sweet boo raises a gay pride flag above a U.S. military base while stationed in Afghanistan. Not a hoax! Not a photoshop illusion. Nicole assures us this is the real deal, baby!


A bottomless well of gratitude and admiration to not only the LGBT members of the military across the globe, but the incredible straight allies that literally wave the flag for equality wherever they go. We’re absolutely humbled and inspired by your support. Thank you!

Equality doesn’t appear to go both ways however.

In November, Politico reported that a Christian cross had been removed from an army chapel…

A large cross that had been prominently displayed outside a chapel on an isolated military base in northern Afghanistan was taken down last week, prompting outrage from some American service members stationed there.


“We are here away from our families, and the chapel is the one place that feels like home,” a service member at Camp Marmal told POLITICO. “With the cross on the outside, it is a constant reminder for all of us that Jesus is here for us.”


“Not having it there is really upsetting,” added another. “I walk by the chapel daily on the way to chow and the gym, and seeing the cross is a daily reminder of my faith and what Jesus accomplished for me. It is daily inspiration and motivation for me to acknowledge my faith and stay on the right path.”


Camp Marmal is a German base that hosts NATO forces. The interfaith chapel in question is supervised by the U.S. Army.


The soldiers said they found great comfort in the chapel —and the cross visible outside. “Sometimes the Church and the ability to openly express religious views ultimately gets people through the deployments over here,” one told POLITICO by email.

You can openly express sexual views in the army, but religious views are apparently too controversial.

Now it’s Christians who have to live their lives in a closet.