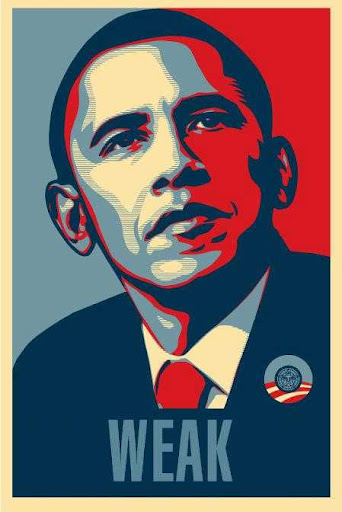 … all we have from Obama is passivity, which is a recurring theme in the administration’s approach to the Middle East. So is “aggressive hedging,” a term used by the Brookings Institution’s Shadi Hamid to describe Obama’s strange reluctance to clearly choose sides in the uprisings of the Arab Spring.

“There’s a widespread perception in the region that Obama is a weak, somewhat feckless president,” Hamid, who runs the Brookings Doha Center, told me. “Bush may have been hated, but he was also feared, and what we’ve learned in the Middle East is that fear, sometimes at least, can be a good thing. Obama’s aggressive hedging has alienated both sides of the Arab divide. Autocrats, particularly in the Gulf, think Obama naively supports Arab revolutionaries, while Arab protesters and revolutionaries seem to think the opposite.”

Not to fear, we don’t take it very seriously here either when the President pretends to be a tough foreign policy advocate.

When it comes to foreign policy, it looks like it was actually George Bush who had the big stick.

Romney Hammers Obama on Unemployment Rate – “America Can Do Better”