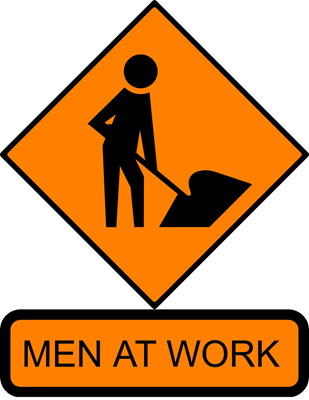 They’ve been around for most of our lives, but a handful of people at a small community college in Ohio have suddenly feigned outrage over those constructions signs that read “Men Working”.

See, because they only specify men, they’re considered sexist.

The construction crew working at Sinclair Community College were forced to remove the signs before being allowed to continue working.

An Ohio community college forced a construction crew to remove its “Men Working” sign after the sign was deemed sexist and non-inclusive by a college administrator.

The construction crew at Sinclair Community College in Dayton was forced to stop working until the sign had been removed.

… The controversy started when a female employee took issue with the “Men at Work” sign. Murka said the employee suggested several alternative phrases to the hard hats – including “construction zone.”

Here’s a news report regarding the issue via MRC…

Nothing beats the brain dead college student they managed to get on video saying that he would be offended if he saw a sign that read “Women at Work”.  How ever did he manage to get into a community college?
The college is also planning to hold a CD protest party in which singles for the track “Who Can It Be Now?” will be tossed into a pile and bulldozed.
We just made up that last part.
Tags
Ohio

Weekend Recess: Watch This Anchorman Ask the Meteorologist to ‘Canoodle’ With Him on Live Television