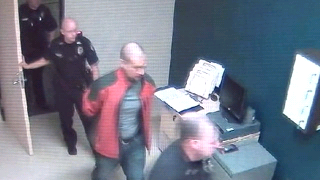 ABC News has been caught in a clear-cut case of journalistic malpractice this past week.  No matter your feelings on the Trayvon Martin case, this is indisputable evidence of the media trying to advance a narrative – and failing miserably.

ABC was apparently so excited about having obtained exclusive police surveillance video last week, that they posted it and subsequently came to their own conclusions.  The headline blasted, “Trayvon Martin Video Shows No Blood or Bruises on George Zimmerman.”

Other media lapdogs ran with it, to the point where the lawyer for Trayvon Martin’s parents referred to the video as “the smoking gun”.

You know who actually went out of their way to perform research and produce actual journalism regarding the video?  Conservative blogs.

The Daily Caller posted a still image the following day which appeared to show a laceration on the back of George Zimmerman’s head.  Liberal’s such as Mediaite’s Tommy Christopher mocked the Caller’s attempt at video analysis, while posting the original ABC video yet again.

But then, Dan Riehl over at Big Journalism followed up on the video report, finding further evidence that ABC had falsely presented the clip as evidence that Zimmerman had lied about being assaulted.

A new High Definition clip from the same video appears to make clear that Zimmerman had a gash or wound of some kind on the back of his head. That would be totally consistent with his version of events on the night in question and opposite the impression ABC News gave its viewers.

Big Journalism called the ABC video-based report reckless and revealing of nothing after it first aired. ABC’s presumed ability to enhance and review video before airing only makes their report all the more outrageous. Given analysis by Breitbart Media and the Daily Caller already performed, the ABC video appeared to be inconclusive, at best.

The new High Defintion clip from the police video Breitbart TV is releasing means that any determination beyond that the video is inconclusive is shoddy, if not intentionally unethical, journalism. To date, ABC has offered no official response to the broad and convincing criticism of the disingenuous nature of their aired report.

And now the DC and Big Journalism have had their vindication, with ABC News having to issue a ‘clarified’ version of the video, showing gashes and welts on Zimmerman’s head.

From the Orlando Sentinel:

The video was unveiled as an exclusive this morning on “Good Morning America.” ABC was the first news organization to show the original tape.

Reporter Matt Gutman said the clearer video shows “what appear to be a pair of gashes or welts on George Zimmerman’s head.”

Neighborhood Watch volunteer Zimmerman has said he shot 17-year-old Trayvon in self-defense. The video shows Zimmerman arriving at the Sanford Police Department within an hour after the shooting.

Gutman said the video had been “clarified” by Forensic Protection Inc. Former FBI Special Agent Brad Garrett told ABC that the clearer video shows “marks on the back of Mr. Zimmerman’s head.”

I’m glad ABC finally took the time to have the video reviewed by experts and clarified, but perhaps they should have done that in the first place.

Whether or not the clarified video will receive as much coverage as the original remains to be seen.  But one thing is for certain – none of the hard working journalists at the Daily Caller and Big Journalism will receive any credit for revealing the failed media narrative pushed by ABC.  ABC alone will receive praise, none of it deserved.

Video: Father of Slain SEAL – Administration “Murderers of My Son”