There is a major probe going on into the breach of Congressional computer security, surrounding three Pakistani brothers who served as IT staff for members of the House Permanent Select Committee on Intelligence.

Oh, you haven’t heard about this in the media?

The three brothers were locked out of U.S. House computer networks as part of the probe, but now we’re learning that one of the staffers allegedly had the user name and password for Debbie Wasserman-Schultz’s iPad, and by extension had access to her DNC emails.

If you recall, Wasserman-Schultz was the Chair of the Democratic National Committee whose emails proved that she was cheating in the Democrat primary to help Hillary and hurt Bernie Sanders.

Imran Awan, the lead suspect in the criminal theft and cybersecurity probe, was referenced in an email discussing an iPad issue.

“I have to get this ipad thing figured out,” Garret Bonosky, deputy director of the DNC wrote. “Need to make sure I have her (DWS) username and password.”

Amy Kroll, DNC Assistant to the Chair, responded: “I do not have access to her ipad password, but Imran does.” 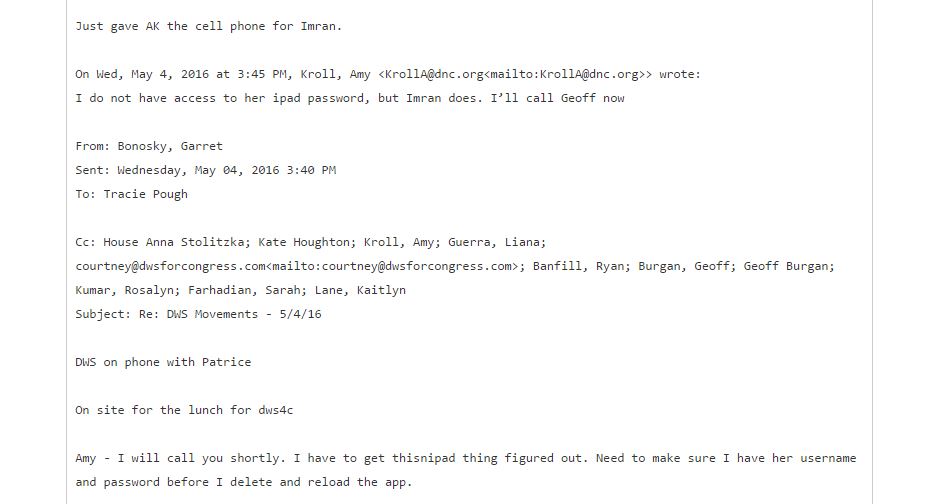 Awan and his fellow family members are accused of having accessed congressional computers without permission. This appears to be a trend at this point.

Imran Awan — the lead suspect in a criminal probe into breaches of House of Representatives information security systems — possessed the password to an iPad used by then-Democratic National Committee Chairperson Debbie Wasserman Schultz when DNC emails were given to WikiLeaks, the Daily Caller News Foundation Investigative Group has learned.

WikiLeaks emails show that although Imran was employed by her taxpayer-funded House office, the Florida Democrat’s world–and iPad–mixed DNC, House and campaign business, and that Imran was on call for, and on a first-name basis with, top DNC staff.

Politico reported that Wasserman-Schultz is “said to have a friendly personal relationship with Awan and his wife.”

Which would explain why a man being investigated in a criminal probe, who has been banned from the House by the House Sergeant at Arms, has yet to be fired by Wasserman-Schultz.

In fact, he continues to “advise” her office!

Debbie has some explaining to do, given her multiple episodes of poor computer security. What were these staffers after?

Trump Jokes About Romney in Self-Quarantine: ‘Gee, That’s Too Bad’

Hillary Clinton Slips Walking Down Stairs Twice, Despite Two Men Holding Her Up