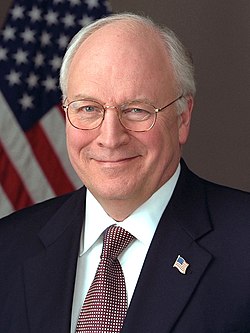 Not just any Maine Democrat, but a man serving on the Maine legislature’s Moderate Caucus no less.  Executing the former Veep – how Moderate of him.

Via the Maine Wire:

Rep. Chuck Kruger (D-Thomaston), the Democrat chair of the Maine legislature’s Moderate Caucus, used his Twitter account to express his view that former Vice President Dick Cheney should be executed. This comment has led some to question the validity of Kruger’s moderate credentials.
Kruger made the statement through his Twitter account this past summer, saying, “Cheney deserves same final end he gave Saddam. Hope there are cell cams,” a reference to technology that would allow Kruger to watch the proposed execution of the former Vice President of the United States.
A tip alerted The Maine Wire to the extreme comment just days after Kruger led a meeting of the Moderate Caucus that featured a visit from Eliot Cutler, a former Democrat and failed candidate for Governor in the fall of 2010.
The keynote speaker, Cutler talked about finding middle ground to work from. “I think we’re going to see a shift that draws the two parties back to the middle,” Cutler said in a Bangor Daily News article. “I think we’re going to see the return to civility and to moderation,” Cutler said in another interview with public radio.
Kruger’s statement is being viewed as anything but civil. 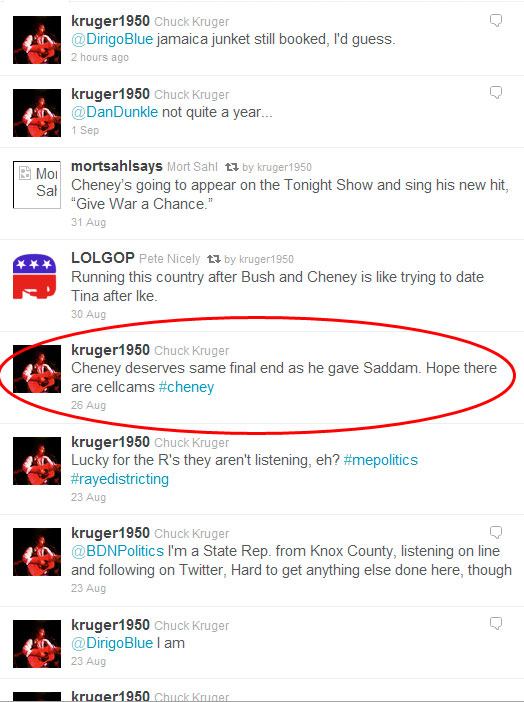 Kruger naturally chalked it up to his simply being a wise-ass, without actually admitting to posting the tweet. In fact, he tole the Maine Wire that he wouldn’t confirm or deny that he posted the comment, because he couldn’t remember doing it.