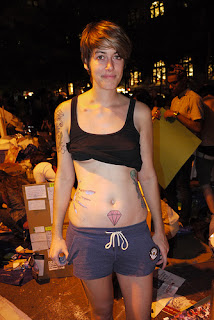 The Albany Times Union is reporting on Occupy Wall Street protester Kaylee Dedrick, and her attempt at a money grab via lawsuit against the NYPD.

Turns out she’s also a teacher’s assistant in the area:

Kaylee Dedrick, 25, alleges that she was peacefully protesting when Deputy Inspector Anthony Bologna pepper sprayed her in the face from a distance of less than two feet temporarily blinding her and leaving her screaming in pain.

As is typical with the OWS protesters, Dedrick portrays herself as a harmless bystander who did not warrant the treatment she received.  But this simply isn’t the case.

Dedrick, who I might remind you is a teacher’s assistant in the North Greenbush school system, was drawing the ire of police prior to the pepper spray incident, when she decided to protest topless on the streets of New York City (video below the fold).

The Times Union report also tries to provide a positive light for Dedrick and the new found love which sprang from the incident.

Dedrick began a relationship with the civilian medic who treated her and the couple is expecting the birth of a daughter in two weeks, Kuby said.

Of course, a quick Google search shows that the relationship between Dedrick and Robert Grodt is nothing but a sham.

Dedrick likes to fashion herself a lesbian, while Grodt spent his time at OWS spreading the love … to several women.

Nudist video below the fold…

Oh did we mention, Dedrick is a teacher’s assistant?