Mediaite’s Tommy Christopher is kind of the male version of Joan Walsh – he can find racism in just about everything.  Including, apparently, the phrase, “Obama’s Not Working”.  Now, to the average human being, that phrase obviously means that his policies aren’t working.  But lo, to Tommy Christopher it means that Obama himself isn’t working.  And in kind, that means Mitt Romney is mocking a ‘black man’ for not working.  Seriously.

To actually come away with such an asinine conclusion shows that this phrase is actually working as a Rorschach test for Christopher.  Most people look at this ink blot and see a benign, simple message.  But Tommy sees racism and prejudice.  For someone to immediately assume the words ‘not working’ must apply only to a black man, they themselves must ultimately harbor stereotypes of the lazy black man.

Presumptive Republican presidential nominee Mitt Romney rolled out a new accessory at a speech in Ohio today, delivering his remarks in front of a black banner that said “Obama Isn’t Working,” which is also the name of a website his campaign set up several months ago (in case you didn’t get the message from the banner, it was also on the front of Romney’s podium).

The slogan is a multiple entendre, but one of those entendres, intentionally or not, is evocative of a nasty racial stereotype about black men.

When I first saw the banner this afternoon, the multiple meanings were clear: President Obama‘s policies aren’t working, the Obama presidency isn’t working, President Obama…isn’t working, as in, doing any work. That’s not a nice thing to say about any president, but like it or not, it becomes a more loaded accusation when leveled at our first black president.

Just to be sure it wasn’t just me, though, I asked several friends about the banner, and four out of four pointed out, unprompted, the stereotype of the “lazy,” “shiftless” black man. One of the people I called was cable news fixture Goldie Taylor, who, upon hearing my description of the banner, said “Are you kidding me? You have got to be kidding me.”

Asking all four of your friends Tommy doesn’t prove anything, other than they are equally as pathetic as you are.

Speaking of entendres, you know who just loves to use them in his posts?  Tommy Christopher.

Like this one when he used an image of Rick Perry eating a corn dog when discussing LGBT issues abroad: 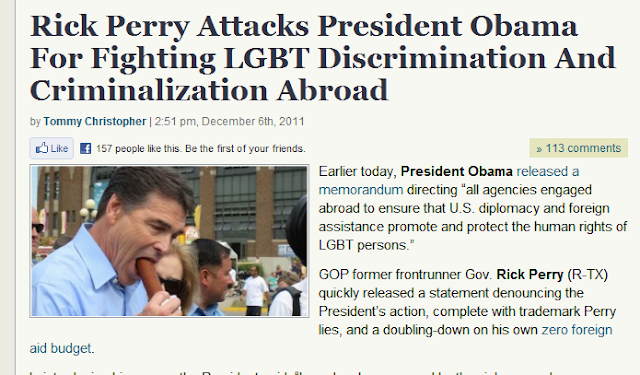 Or when using the headline ‘Mother-Huckster’:

Incidentally, when viewing video of the ‘Swedish race cake’ incident, where a Swedish official cut into a cake of a caricature of an African woman, and which included the artist in “blackface” make up, Tommy saw nothing but ‘performance art’. 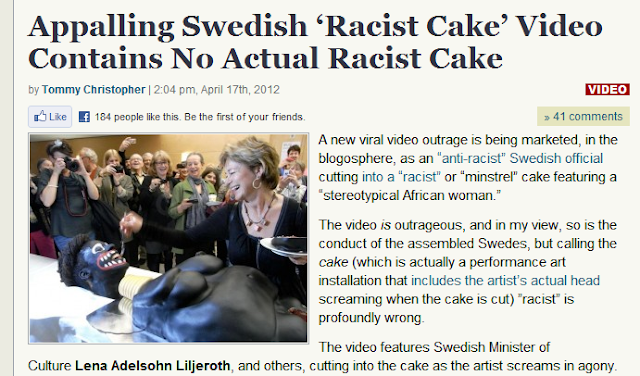 As much of a tool as Christoper perpetually portrays himself as being, this is by far one of his more egregiously idiotic statements.  And that’s saying something.
Obama’s not working, Tommy.  And neither is your white guilt race-baiting.
Tags
Mitt Romney President Obama Racism Rick Perry