A New York newspaper serving the lower Hudson Valley caused quite a stir last month, when it published an interactive map of gun owners in the area.

Not to be outdone, the liberal website known as Gawker has decided to post a list of all gun owners in New York City, while promptly labeling everyone on the list as an “asshole”.

The list was assembled from various online sources along with a Freedom of Information Act which yields, according to the article, 1.2 million names along with 300,000 addresses.

… Below is a 446-page list of every licensed gun owner in New York City. I obtained it from the NYPD two-and-a-half years ago via a Freedom of Information Law request. Because the NYPD is more interested in raping and/or eating ladies and spying on Muslims than it is in honoring public records law, the list contains only the names, and not the addresses, of the licensees…

… I reported in 2010 that the names of Fox New chief Roger Ailes, his mouthpiece Sean Hannity, Howard Stern, Don Imus, Donald Trump and Donald Trump Jr., and Estee Lauder heir Ron Lauder appear to have permits to carry or own guns in the city—though the lack of addresses makes it difficult to verify that it’s Howard Stern the radio personality as opposed to Howard Stern the accountant from Queens…

…But if it’s addresses you want, look no further: New York pistol owners must register not only with their local police departments, but with the state as well.  And the names of 1.2 million New Yorkers licensed to own handguns, and the addresses of 300,000 of them, have been freely available online for more than two years.

Of course, this is raising the bar from what the Journal News in New York did last month.

The Journal News had put gun owners on the same level of sex offenders, made them targets for the overzealous gun control crowd, and also gave criminals a handy map of homes that are left unprotected.

The message was clear – guns are bad, and here’s where you can find them.

Now Gawker has done the same thing by allowing John Cook to post his list.  Only question remaining is, who is the real asshole here?

UPDATE (h/t Adam):  Gawker changes the post headline … sarcastically.  The word ‘asshole’ is now in strikethrough format, and has been replaced with ‘handsome law-abiding citizens’.

Here is a screen capture: 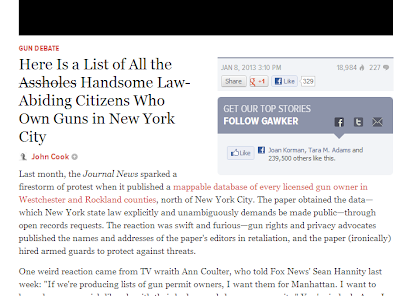 In response, the Mental Recession will NOT be editing our commentary – John Cook and the folks at Gawker are still indeed assholes.
Tags
Gun Control Liberals New York New York City