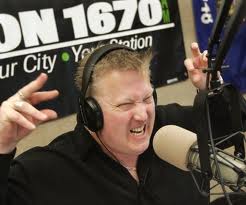 A few days ago, conservative author Ann Coulter summed up the left’s reaction to the death of Andrew Breitbart with this statement:  “Even in death he shows liberals in their true colors”.  With that, those true colors, the same rage and venom being spewed in Breitbart’s direction, continues.


Last week, we saw Rolling Stone publish a piece in which author Matt Taibbi lamented how happy he was for Breitbart to be gone.  We saw Slate columnist, Matt Yglesias, proclaim that “the world outlook is slightly improved” with Breitbart dead.  And then there was former editor of the New York Press, and Taibbi cohort, Jeff Koyen, mock writers defending Breitbart as “hitching yourself to a corpse”.

Continuing in that same vein of sub-standard decency is liberal radio host, John “Sly” Sylvester of WTDY in Madison, Wisconsin.  Sylvester recently aired a 20-minute segment on his radio show which was posted as a Podcast entitled, “Andrew Breitbart:  Dead (thankfully)“.

While the title was simply beyond the pale, the content of the podcast is as vile as it gets. Starting at the 5:00 mark and continuing to 6:43 is a monologue by the host Sly in which he mockingly says he would pour weed-killer on Breitbart’s grave. He then compares his joy at the news of Breitbart’s death to that of Yemeni terror leader Anwar al-Awlaki’s death in September 2011.

Here is a short list of Sylvester’s most vitriolic comments towards a recently deceased husband and father of four young children:

The podcast has since been removed from Sylvester’s site, but fortunately the folks at Media Trackers posted a screenshot, which can be seen here.


Additionally, I’ve contacted Program Director for WTDY, Rex Charger via e-mail seeking a comment, but have yet to receive a response.  Perhaps Mental recession readers would have better luck (h/t Bethany) by clicking here…