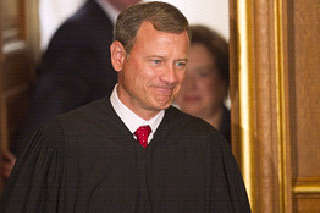 Specifically, they’re calling out John Roberts in an attempt to convey the message that if he dares contribute to the overturning of Obamacare, he is simply doing so based on radical conservative judicial activism.

Nevermind it is an unconstitutional overreach of government power.

You can tell the Supreme Court is getting closer to its historic ObamaCare ruling because the left is making one last attempt to intimidate the Justices. The latest effort includes taunting Chief Justice John Roberts that if the Court overturns any of the law, he’ll forever be defined as a partisan “activist.”

Senate Judiciary Chairman Pat Leahy recently took the extraordinary step of publicly lobbying the Chief Justice after oral argument but before its ruling. “I trust that he will be a Chief Justice for all of us and that he has a strong institutional sense of the proper role of the judicial branch,” the Democrat declared on the Senate floor. “The conservative activism of recent years has not been good for the Court.”

He added that, “Given the ideological challenge to the Affordable Care Act and the extensive, supportive precedent, it would be extraordinary for the Supreme Court not to defer to Congress in this matter that so clearly affects interstate commerce.”

The elite liberal press has followed with pointed warnings that Mr. Roberts has a choice—either uphold ObamaCare, or be portrayed a radical who wants to repeal the New Deal and a century of precedent. This attack is itself clearly partisan, but it’s worth rehearsing the arguments to show how truly flawed they are.

Bolton: “We Need a Real President in the White House”

Photo: Biden Gets Friendly With a Biker Chick In His Lap, Biker Guys Not Amused

Joe Scarborough: ‘No One’ in GOP Establishment Thinks Romney Will Beat Obama