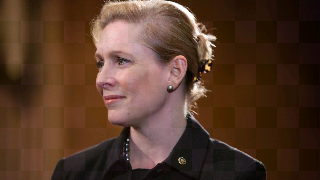 It was just a few weeks ago that New York Senator Kirsten Gillibrand, was criticizing ‘partisan gridlock in Washington’.

A report in early February – when Gillibrand announced a visit to the capital district – read:

We were quick to point out that being non-partisan to Gillibrand involves voting along party lines nearly 100% of the time.

And when she says partisan gridlock, she is absolutely not referring to her voting record… which consists of party-line votes at a rate of nearly 97%. Only Republicans cause gridlock.

Now however, it is official – Gillibrand has been handed the title of one of the most partisan senators in the country.  She has been named ‘Most Liberal Senator’.

From the National Journal:

“The issue that has brought Gillibrand the most attention by far is her call for repeal of the 17-year-old “don’t ask, don’t tell” policy barring openly gay military service members. She introduced legislation in July 2009. In National Journal’s 2010 survey, she was tied with fellow Sen. Chuck Schumer of New York as the 10th most liberal member of the Senate.”

The Republican party today teed off on Gillibrand for, among other things, changing her tune after having portrayed herself as a “gun-toting centrist” when first appointed by then-Gov. David Paterson to replace now-Secretary of State Hillary Clinton.

“Our junior senator has veered so far off the mainstream path to curry favor with left-wing Washington leaders that the average New Yorker can hardly recognize her anymore. Ms. Gillibrand’s candidacy has been a bait and switch: She ran as Calamity Jane but governs like Jane Fonda.”

NY Senator to Piers Morgan: You Get Paid For Being a Jerk

Ulster County Sheriff: After Terrorist Attacks, Citizens Must Arm Themselves

Business Group With Over 11,000 Members Can’t Find One That Has Seen Lower Costs Under Obamacare