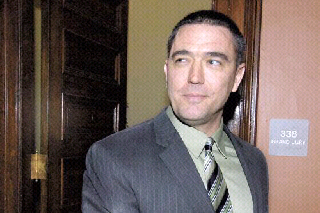 Thursday’s edition of Inside Politics saw the Times Union getting up to speed on a story first published here last week, in which Troy City Council Democrats censored James Gordon for having the gall to request a review of a morally challenged convicted felon who is actively serving on the council.  Kevin McGrath, the councilman who currently serves more as a distraction and embarrassment than a viable public servant, is the man in question.

In the Times Union piece, McGrath once again brushes off valid concerns of the citizens of Troy by saying any attention being focused on him is merely “a smear campaign”.

McGrath is right.  The smear campaign has not been conducted by the GOP however, it has been waged by McGrath himself on the City of Troy.

Kevin McGrath’s moral bankrputcy has smeared the City of Troy.

When he ran for public office despite being ‘concerned’ about his history of substance abuse and ‘the fact that he is a convicted felon’, he smeared the City of Troy.

The City of Troy and the judge in the voter fraud trial were smeared when McGrath’s testimony involved cracking a joke about his lack of drug-peddling business savvy – a comment that forced him to apologize to the judge.

The public was once again smeared when details of McGrath’s drug selling prowess were proven false – he was one of 17 arrested for an open-air drug network that operated at a profit of ‘a few million dollars’.  It was the arrest that earned him the honor of convicted felon.

The people of the City of Troy, along with the integrity of the entire local election process were smeared when McGrath was presented with a stack of forged absentee ballots that defense attorney Brian Premo alleged were handled by the Councilman himself.  While Premo had only made allegations according to the media reports, court transcripts show an exchange in which he asks McGrath if he realizes he “committed crimes in this case”.  To which McGrath responds, “I have been told, yes.”

Perhaps the ultimate smear on the City was this – when presented with forged ballots that the defense attorney said were handled by McGrath personally, he blamed the voters for any confusion about his handling of their ballots.

Indeed, McGrath has been a participant in a disgusting smear campaign – his actions have smeared the City of Troy, and its residents are left cleaning up the trail of slime left in his wake.

That said, two points regarding the Times Union piece yesterday:

First – The article states that Lynn Kopka ruled Gordon out of order for personal attacks.  The way that it is written would make the reader think that she was accurate in that assessment, which she was not.  If citizens are not allowed to cite facts – provable facts at that – when voicing concerns over a sitting Council member, then that is a major problem.  Now, any item that Kopka disagrees with can be gaveled out of order as an alleged personal attack.

Second – The last sentence reads in a manner that gives the impression that McGrath would have to have been charged in order for the Council to take action.  This too, is false.  The charter specifically cites ‘disorderly conduct and malfeasance’ as means to expel a Council member.  McGrath may yet face charges for ballots forged on the Conservative and Independent lines.  He was shown to have admitted in court that he had committed crimes.  He just recently admitted to felony drug charges.  If these things do not constitute disorderly conduct, then I am at a loss.

As for James Gordon’s right to free speech having been violated, I have contacted the Council and the Mayor’s office several times since the video of the meeting surfaced, and have yet to receive a response.

Mayor Lou Rosamilia and Council President Lynn Kopka can only hide behind their gavels and closed doors for so long – at some point they have to address the expulsion of Kevin McGrath, or continue dodging questions about an election-rigging, convicted felon in their midst.

I should think the former would be the easiest route.

Cuomo Says His Superpower Would Be Superior Intellect

De Blasio Hints Rioting Is Okay, Going To Church Is Not – They’re ‘Not the Same’