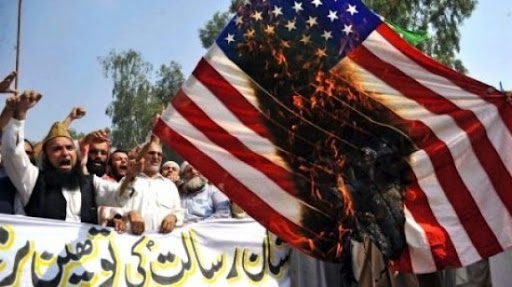 The world works in mysterious ways…

Several Muslim parties and a Christian group held rallies on Sunday to protest against a movie released in America.

Around 10,000 people participated in the main rally organized on The Mall by the Tehreek Hurmat-i-Rasool (THR). The participants marched from Nila Gumbad to Masjid-i-Shuhada on The Mall. Despite a ban on rallies on The Mall, the road remained blocked for vehicular traffic from noon to 6pm.

One of the participants of the rally, Abdullah Ismail, passed away after he was taken to Mayo Hospital. Witnesses said he had complained of feeling unwell from the smoke from US flags burnt at the rally.

And it wasn’t just your run of the mill flag-burning rallies either.  The protest, held in Pakistan, featured radicals demanding that the U.S. make laws criminalizing free speech, and insisting that those involved with the movie be hanged publicly.