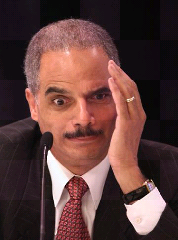 Holder needs to come clean.  And by come clean, I mean apologize to the family of Brian Terry, resign, and wait to be charged with lying under oath.

A document the Department of Justice sent to Congress Friday shows that Eric Holder’s deputy chief of staff was made aware on the day of U.S. border Patrol Agent Brian Terry’s murder that a weapon traced back to Operation Fast and Furious killed him. But when asked Sunday, a Justice spokesperson would not would not answer The Daily Caller’s question about whether Attorney General Eric Holder himself was informed of the connection on that day.
The documents sent from the DOJ to congressional officials Friday night included a series of emails between former Arizona U.S. Attorney Dennis Burke and Holder’s then-deputy chief of staff Monty Wilkinson. Those emails show Wilkinson, a senior Holder aide, knew on December 15, 2010 — the day Terry was killed – that the weapons used to murder him were provided to a Mexican gang by the Bureau of Alcohol, Tobacco, Firearms and Explosives.
On that day, records show, Burke wrote to Wilkinson that “[t]he guns found in the desert near the murder[ed] BP officer connect back to the investigation we were going to talk about – they were AK-47s purchased at a Phoenix gun store.”
The emails also show that Wilkinson “alerted” Holder of Terry’s death on that day. They do not, however, show whether he told Holder that Operation Fast and Furious had provided Terry’s killer with the means to murder him.

Keep reading for more corruption at the Department of Justice…

Democrat Lawmaker Says 20,000 Jobs is Not That Many