As covered by the Political Insider, a federal judge in San Francisco has blocked the President’s executive order restricting federal funds for so-called ‘sanctuary cities,’ part of Trump’s effort to crack down on illegal immigration.

The judge in the case, Judge William Orrick III, is a major campaign bundler of former President Obama, as well as a donor himself.

Why are we not surprised? And why do all the liberal media reports about the case leave out this crucial fact? 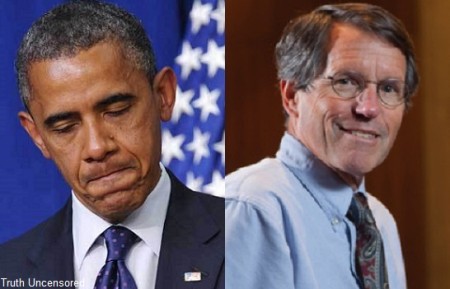 Earlier this year, the President responded to another court’s decision to block an immigration order on travel into our country by strongly suggesting the courts had become politically biased, rather than interpreting the law.

“I don’t ever want to call a court biased, so I won’t call it biased … but courts seem to be so political, and it would be so great for our justice system if they would be able to … do what’s right, and that has to do with the security of our country,” he said.

As details of the man behind the sanctuary cities ruling come out, it calls into question once again the impartiality of the judge ruling against the President.

In fact, Judge Orrick III’s past is so slanted politically, that it’s impossible to think he could have ruled without bias in this case.

Orrick, of the Northern District of California, issued an injunction against the Trump administration after the city of San Francisco and county of Santa Clara sued over the president’s plan to withhold federal funds from municipalities that harbor illegal immigrants.

At the time, The Federalist found that Orrick raised at least $200,000 for Obama and donated more than $30,000 to groups supporting him.

Orrick also raised money as a bundler for John Kerry’s failed presidential campaign in 2004 – to the tune of over $100,000.

With nearly a decade of aiding Democrat candidates on his resume, Obama nominated him to his current position in June of 2012, and was confirmed in February of 2013.

Important takeaway from #sanctuarycities ruling is just how radical some judges have become in legislating from the bench. They are corrupt.

Additionally, Orrick worked in Obama’s Justice Department in 2010, helping to craft arguments used in a lawsuit by the department against Arizona for their strict anti-illegal immigration bill, SB 1070.

Why would an appointee to the courts, with such a blatantly obvious slant to one side of the political aisle, ever be confirmed for such a position?

The vote to confirm Orrick was mainly a party line vote, with Republican Jeff Flake being the lone vote to cross party lines.

Beyond that, the question also must be asked, how was Orrick able to rule on this sanctuary city order in the first place? During his Senate confirmation hearing Orrick was asked about his policy on immigration-related cases.

Orrick claimed he would recuse himself “from any case that was pending in OIL [Office of Immigration Litigation] while I was Deputy Assistant Attorney General and from any other case as required by the Code of Conduct for United States Judge as well as other relevant Canons and statutory provisions.”

The fact that there is any doubt about the impartiality of a federal court judge demonstrates that the judicial system has become very political now that President Trump is in office. And there is nothing just about that.

Do you think this Obama-appointed judge is another activist ruling from the bench, while making our country less safe? Share your thoughts with us below.

Bill Maher Has A SERIOUS Warning About Islam