Former Vice President Joe Biden gave the strongest signal yet that he is considering a presidential campaign in 2020, describing himself as the “most qualified” person to fill the role.

“I’ll be as straight with you as I can,” Biden told a Montana crowd as he promoted his memoir, Promise Me, Dad. “I think I’m the most qualified person in the country to be president.”

It is an unmistakable shot across the bow, staking his claim to the Democrat party’s nomination.

“The issues that we face as a country today are the issues that have been in my wheelhouse, that I’ve worked on my whole life,” Biden added. “No one should run for the job unless they believe that they would be qualified doing the job.”

Would Immediately be the Democrat Frontrunner

Despite the clear comments, Biden said he hadn’t made an official decision as of yet, noting he and his family were “going to make that decision in the next six weeks to two months.”

Polls have consistently placed Biden at the top of the Democratic heap of candidates, besting Senators Bernie Sanders and Elizabeth Warren, and even topping Oprah in the category of likely voters.

He has an ‘Uncle Joe,’ ‘kind of guy I’d have a beer with’ appeal to him and scores well with older voters, where President Trump also does well.

But his flaws are many.

Biden fully admits to being a “gaffe machine” but says he’s not concerned about it compared to his competition.

“I am a gaffe machine, but my God what a wonderful thing compared to a guy who can’t tell the truth,” he said.

So whether he’s telling a man in a wheelchair to stand up, talking about Barack Obama’s ‘big stick,’ claiming ‘jobs’ is a three-letter word, or saying the local 7-11 is full of people with Indian accents, Uncle Joe is ready to roll.

What About the Fact He’s Also a Grope Machine?

To be blunt, Joe has a “hands-on” approach to politics, and he’s demonstrated it time and time again. 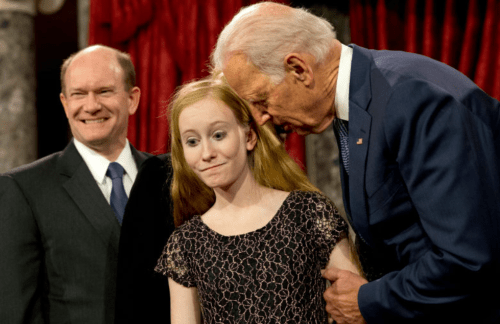 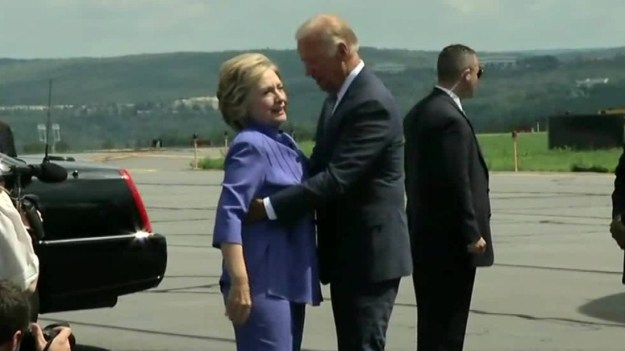 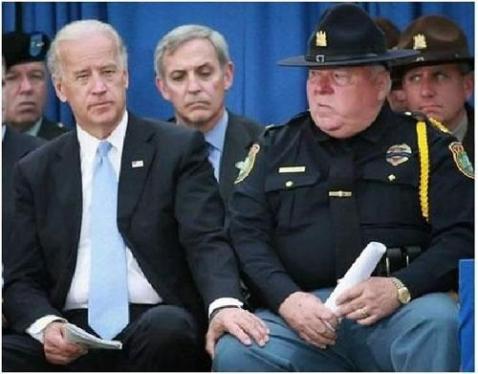 What does he plan on doing if Bikers for Trump see him on the campaign trail?

Both Biden and Trump seem to relish the opportunity to face one another in 2020.

Biden has said that he’d only consider a presidential run if he could take on Donald Trump.

“If Trump runs, Biden is suggesting he’s likely to do it because age won’t be a factor,” an individual close to Biden told FOX Business. “He also thinks he can beat Trump.”

Trump meanwhile, has already referred to Biden as his ‘dream’ opponent, taunting him for never getting more than 1 percent in previous bids and saying he only got where he was because “Obama took him out of the garbage heap.”

He also has a nickname lined up for him to play off of Biden’s grope-happy ways – ‘Creepy Joe.’

Will We See a Trump/Biden Street Fight?

Back in March, Biden challenged the President to a schoolyard brawl, saying: “If we were in high school, I’d take him behind the gym and beat the hell out of him.”

Crazy Joe Biden is trying to act like a tough guy. Actually, he is weak, both mentally and physically, and yet he threatens me, for the second time, with physical assault. He doesn’t know me, but he would go down fast and hard, crying all the way. Don’t threaten people Joe!

Biden almost immediately ran away with his tail tucked between his legs.

Perhaps in lieu of one of the debates, both candidates could just meet each other at the flagpole near their closest local high school.