Hogg, who has been climbing on the backs of dead classmates in an attempt to push the Democrat line on gun control, gun bans, and gun confiscation, tweeted a picture of some new armbands he wants his fellow advocates to start wearing.

Hogg’s sister posted a picture of her and her brother sporting the fashion accessories.

“Inspired by the Supreme Court landmark case Tinker vs Des Moines I’m starting #armbandsforchange,” she wrote. “Make your own and wear it to school or work to protest gun violence.” 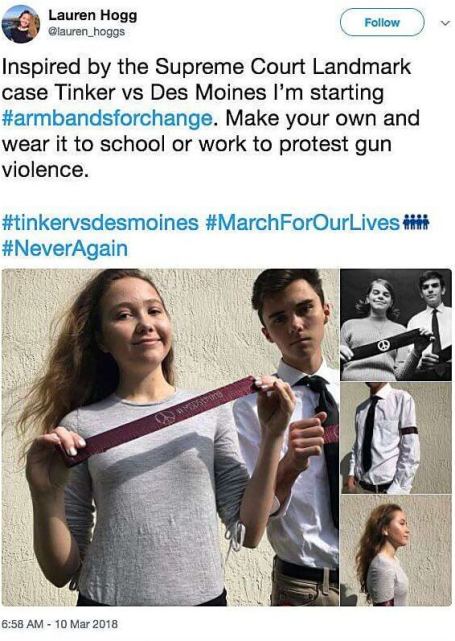 The fact that they would promote armbands when discussing gun control shows a serious flaw in their education.

Woods was more than happy to point that out, obliterating the ignorant Hoggs as to why the concept might be less than ideal.

“You might have a little trouble getting Jewish Americans to embrace this look,” Woods wrote. “Do you have any shiny jackboots and brown shirts to go with it? Guessing you might’ve skipped history class while you were shilling for the DNC.”

You might have a little trouble getting Jewish Americans to embrace this look. Do you have some shiny jackboots and brown shirts to go with it? Guessing maybe you skipped history class while you were shilling for the @DNC… pic.twitter.com/WfA4jL9y65

The armbands easily draw comparisons to the Nazi Party in the 1920s and 1930s, right around the same time Germany was implementing gun-control measures and registries that helped lead to Hitler’s rise to power.

“The perennial gun-control debate in America did not begin here,” writes Stephen P. Halbrook of the National Review. “The same arguments for and against were made in the 1920s in the chaos of Germany’s Weimar Republic, which opted for gun registration.”

“Law-abiding persons complied with the law, but the Communists and Nazis committing acts of political violence did not,” he explained.

Woods pointing out the obvious associations led to Hogg deleting the picture and issuing an apology on social media.

I am so sorry if I offended anyone with my former tweet, I had no intention of bringing any bad connotation to what we are trying to do which is using our past as in the Tinker vs Des Moine case to create a better future for us all.

For his part, Woods commended Hogg for deleting the image and drawing comparisons to a time best left in the past.

“I commend you for correcting an image that could be mistaken for a hurtful one,” he wrote. “We all want a better future. I respect your voice, regardless of any differences we may have. Please just beware of political hacks trying to commandeer your genuine aspirations for a better world.”

Do you support Woods and his education of David Hogg? Share your thoughts below!