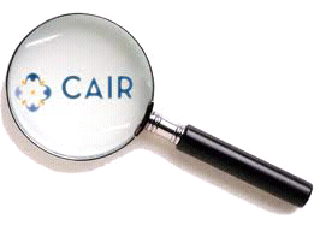 This is beyond outrageous.  Could somebody please explain to the officials running Michiganistan that they still live in America? … for the time being anyway.

In the middle of an event to extol the virtues of the U.S. Constitution and “American Laws For American Courts,” the audience learned first-hand how easy it is to lose their freedom of Speech and Assembly.

Amid shouts of “What about free speech?” from the audience, the Allegan Police Department ordered the event shut-down. School officials notified police that they had received a letter complaining about the event from Dawud Walid, Executive Director of the Council on American-Islamic Relations (CAIR-MI). The letter asked the school to disallow the event despite an existing contract. CAIR was named as an unindicted co-conspirator in the largest terrorism funding trial in U. S. history, U.S. v. Holy Land Foundation.

As a result, the Thomas More Law Center (TMLC), a national public interest law firm based in Ann Arbor, Michigan, announced today that the Council on American-Islamic Relations (CAIR- MI), its Executive Director, the City of Allegan, the Allegan Police Department and the School District were named as defendants in a thirty-four page civil rights lawsuit filed in the Federal District Court for the Western District of Michigan, this morning. The claims included constitutional and contract violations. Click here for copy of federal complaint.

Richard Thompson, President and Chief Counsel of the Law Center commented, “It’s amazing how much clout CAIR has with the political establishment of both parties in Lansing and throughout Michigan and the nation. This, despite the fact that CAIR has its roots in the Muslim Brotherhood, was listed as an unindicted co-conspirator in the Holy Land Foundation trial, and the FBI’s former chief of counterterrorism, noted that CAIR, its leaders, and its activities effectively give aid to international terrorist groups.”

This isn’t some paranoid right-wing entity that ties every Islamic organization to terrorism.  CAIR’s ties to terrorist organizations are real and tangible.

Here is an excerpt from my report on the New York Times and the wrongfully discredited film, the Third Jihad.

Oddly enough, the strongest opposition has been from groups such as CAIR, a prime example of the organizations that are actually exposed in the film. Ryan Mauro points out that the ones trying to silence the film and who oppose its use as training material in law enforcement are the same ones who stand to lose the most from the films portrayal of radical Islam.

“What amazes me is how The New York Times and other outlets seem to treat CAIR as an objective source,” Mauro said. “We expose how CAIR and its allies grew out of the Muslim Brotherhood and the federal government has provided evidence tying them to Hamas—of course they are going to try to discredit us.”

Indeed, CAIR was one of three prominent Islamic organizations that were named as an ‘unindicted co-conspirator’ in a case alleging criminal conspiracy to support the Palestinian Arab terrorist group, Hamas. A report in The New York Sun documented this, while including the following statement:

“CAIR, in particular, has faced persistent claims that it is soft on terrorism. Critics note that several former CAIR officials have been convicted or deported after being charged with fraud, embargo violations, or aiding terrorist training. Spokesmen for the group have also raised eyebrows for offering generic denunciations of terrorism but refusing to condemn by name specific Islamic terrorist groups such as Hamas or Hezbollah.”

Yet the group had little trouble calling out the New York Police Department, their commissioner Ray Kelly, the mayor of New York, and the filmmakers specifically by name when denouncing something critical of CAIR itself.

That same Sun report, however, featured FBI officials that still felt the designation of co-conspirator was not warranted. A mere two years later though, they had come to the realization that CAIR’s relationship to Hamas was real, severing its once-close ties to the organization, and labeling them as nothing more than a front for the terrorist group. Executive Director of CAIR, Nihad Awad, was shown to have participated in planning meetings with the Holy Land Foundation, five officials of which were convicted in December of funneling $12.4 million to Hamas. Not only is Hamas an official U.S.-designated terrorist group, according to the Investigative Project on Terrorism, but it is illegal to provide support for it within the United States.

The rest of the report can be read here…

Ironically, the opening to that report seems appropriate for this new situation in Michigan.

Imagine a nation bound so tightly to the throws of the politically correct, that it can no longer defend itself. A nation so overcome with fear, that the common sense act of targeting the most likely terrorists is no longer considered an acceptable practice. Imagine an entire nation transformed from the basic understanding that it is at war with radicals willing to launch themselves as missiles into twin towers, to having the discussion turned completely on its head, to the point where even talking about that enemy is deemed taboo.

Thanks to the … brazen demands of terror-linked groups, America no longer has to imagine. We’re living it.

We’re living it indeed.  The Constitution takes second place to the demands of a terror-linked Islamic organization.  How easily we have forgotten that America comes first, and CAIR does not represent America’s best interests – they represent their own.

Journalists Being Trained by Pro-Obamacare Group on How to Report on Obamacare?