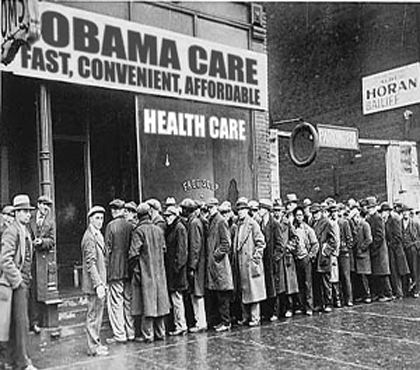 Remember when the White House was playing a political posturing game when it came to “fiscal cliff” negotiations, urging Americans to take to Twitter and tell Congress exactly what a $2,000 increase in taxes would mean to them?

So today, I’m asking Congress to listen to the people who sent us here to serve. I’m asking Americans all across the country to make your voice heard. Tell members of Congress what a $2,000 tax hike would mean to you. Call your members of Congress, write them an email, post it on their Facebook walls. You can tweet it using the hashtag #My2K.

Well now you can go ahead and fire up the #My20K hashtag, because that’s what it’s going to cost you and your family each year to purchase a health care plan – $20,000 … at minimum.  This information comes from a government bureau – the IRS.

In a final regulation issued Wednesday, the Internal Revenue Service (IRS) assumed that under Obamacare the cheapest health insurance plan available in 2016 for a family will cost $20,000 for the year.

Under Obamacare, Americans will be required to buy health insurance or pay a penalty to the IRS.

The IRS’s assumption that the cheapest plan for a family will cost $20,000 per year is found in examples the IRS gives to help people understand how to calculate the penalty they will need to pay the government if they do not buy a mandated health plan.

The examples point to families of four and families of five, both of which the IRS expects in its assumptions to pay a minimum of $20,000 per year for a bronze plan.

Bronze will be the lowest tier health-insurance plan available under Obamacare–after Silver, Gold, and Platinum.

Of course, this comes in addition to the taxes that Obamacare will already impose on the middle class, and the fact that Obamacare is already driving people out of their full-time jobs.

So what say you, should we tell the President exactly what $20,000 means to you and your family?

Obamacare Architect: Americans Still Too Stupid to Understand How Good it Is

Philadelphia Eagles Player Posts Picture of Himself ‘Peeing’ on IRS Sign, “Audit This”