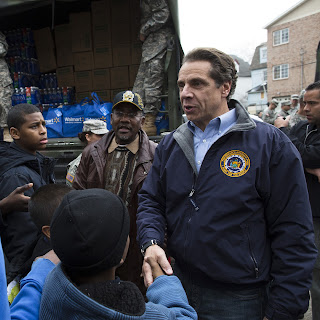 An independent auditor charged with examining New York state goverment spending on recovery and cleanup efforts after Superstorm Sandy, was fired almost immediately after filing the report according to the Albany Times Union.

The consultant, Thomas Sadowski, was escorted from the building in which he presented his spending report which indicated state employees had made questionable purchases and transactions.

Some of those transactions included “poor oversight of the use of state credit cards, orders for a fleet of SUVs and the purchase of iPads that did not seem necessary for recovery efforts.”

Sadowski‘s report merely provided suggestions on how to improve the state’s procurement practices, but was deemed threatening enough to the state spending spree that he was expelled.

An excerpt from the Times Union report reads:

Sadowski said he saw and heard things that disturbed him, including what appeared to be attempts to get the federal government to reimburse for expenses that were not directly related to storm response.

He said managers had no idea where assets were in the field and that procurement policies and practices were not up to the standards needed for response to a large-scale disaster.

Sadowski said one manager provided credit cards to employees who weren’t aware of how to document purchases, opening up opportunities for fraudulent and wasteful spending.

He said thousands of dollars of purchased and leased items went missing, could not be found promptly or were not used effectively while leasing bills mounted. He questioned the purchase of the Tahoe SUVs and the acquisition of several iPads for state emergency management personnel.

Bear in mind that New York will now be receiving a substantial portion of the recently passed $50.5 billion Sandy Aid package that some Republicans wanted to trim wasteful spending on – and were villified for doing so.