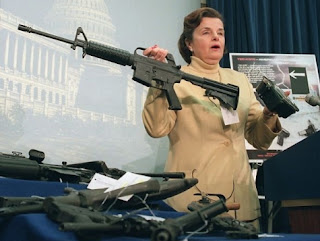 Not everyone will have to abide by Senator Dianne Feinstein’s gun control bill. If the proposed legislation becomes law, government officials and others will be exempt.

The Huffington Post confirms these exemptions, and adds that guns owned prior to the legislation becoming law will be permissble, too. “[T]he bill includes a number of exemptions: It exempts more than 2,200 hunting and sporting weapons; any gun manually operated by a bolt, pump, lever or slide action; any weapons used by government officials and law enforcement; and any weapons legally owned as of the date of the bill’s enactment.

Guns… Bad for thee, but not for me.

Video – Geithner on the Amount of Money Needed to Cover Future Obligations: “It Would Make You Uncomfortable”