Earlier today, we discussed ‘civic illiteracy’.  Specifically, the concept that 42 percent of voters in the 2012 election somehow found the President’s response to Hurricane Sandy to be important to them, while seemingly brushing off the entirety of other aspects of his four years in office.

But that important response was an illusion, and the equally ‘civically’ illiterate governor of New Jersey, Chris Christie should take note.

If one were to visit the White House website currently, they might stumble on this iconic photo adorning the site, posted two days after Hurricane Sandy ripped through the north eastern United States. 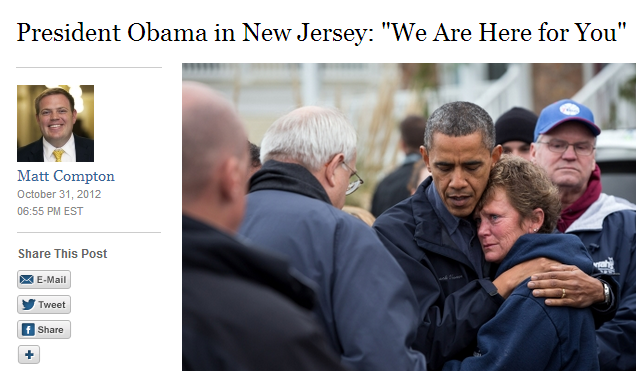 The image is of Dorothy Vanzant, a woman whose marina was destroyed during the storm, and whom the President promised would “immediately get help”.  That exchange can be seen in this video (h/t Citizen Journalist):
The concept of immediacy is important, as the fawning Christie also mentioned the President’s ‘immediate’ actions when talking about Obama’s allegedly ‘outstanding’ response to the crisis.

“One of our challenges now is to get back to normalcy,” said Gov. Christie. “And so the things we need to do is to make sure that we get power restored as quickly as possible; make sure that people have clean drinking water, and waste water treatment plants are working; hospitals are taken care of the way they need to; and that we get kids back to school. And so, I discussed all those issues today with the President, and I’m pleased to report that he has sprung into action immediately to help get us those things.

NorthJersey.com (h/t Weasel Zippers) reports that Vanzant’s immediate relief has been anything but:

She said she was honored to meet Obama, but she is also frustrated that she has yet to receive help from either her insurance companies or the government. “The president told me I would get immediate help,” she said.

“Looking back on it, it wasted a lot of people’s time,” she said of the visit.

The future of the North Point Marina remains uncertain. “I am just moving minute by minute, because the insurance companies are telling me no, no, no!” she said.

Perhaps Christie and Obama could look over a dictionary quickly, define the terms ‘outstanding’ and ‘immediate’, and get back to Ms. Vanzant at some point.  After all, it’s not like they’re too busy doing other things.

Except for the cameos on SNL.  Or holiday golfing.

Unfortunately Vanzant is correct – the President has wasted a lot of people’s time.  And unfortunately, he’ll be wasting another four years – partially because of his response to Hurricane Sandy, and a photo-op hug with this same woman.

Obama Campaign Manager Says Americans ARE Better Off Under Obama