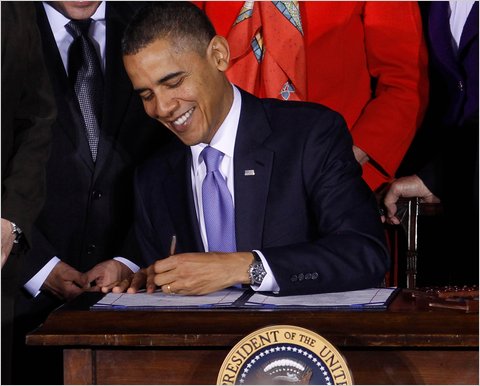 On a bi-partisan vote of 287-129 the House of Representatives approved H.R. 6726, a bill to overturn the President’s executive order that gave an across the board pay hike to Members of Congress and federal bureaucrats. The President’s executive order will cost taxpayers $11 billion over the next 10 years.  The bill was introduced by Rep. Michael Fitzpatrick, R-Pa. House Oversight and Government Reform Committee Chairman Darrell Issa, R-Calif., led debate on the House Floor.

“The President, the Senate Majority, and the House Minority have not been able to agree to even the most meager spending cuts,” Issa said in the statement. “Yet the President’s executive order gives all members of Congress a salary hike on top of the $174,000 a year we already earn.”

The President’s executive order gave an across the board salary hike to white collar federal employees, whose average compensation exceeds $100,000. In January 2012, the nonpartisan Congressional Budget Office (CBO) issued a study which found that total compensation for federal employees was 16% greater than comparable private sector employees.

“The President’s across the board pay increase for white collar workers is not necessary to retain talented employees and just wastes taxpayer money,” Issa continued. “Federal employees have continued to receive promotions and within-grade pay increases over the past few years of the supposed ‘pay freeze,’ and voluntary separations from the federal government are near all-time lows.”

The CBO study also found that:

Federal employees will continue to receive salary increases under routine adjustments driven by the passage of time that move employees into higher salary brackets, regardless of performance.  Each year, more than 99.9 percent of federal employees eligible received these within grade step increases. A recent study conducted by the Partnership for Public Service found that federal employees are increasingly dissatisfied that compensation is not tied to performance.

Small Business Owners Fight Back With “I Built This” Video