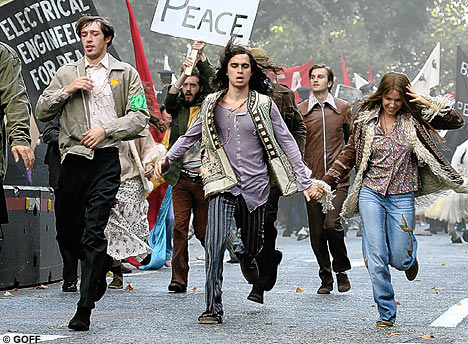 A group known as the Tar Sands Blockade has come up with a brilliant idea that is sure to rock the environmental and energy debate – chaining themselves to equipment in an attempt to halt work on the job-creating Keystone Pipeline.

It may go done as one of the saddest protest efforts in history.

Here is a sampling of their self-congratulatory announcement:

“Today’s action has halted work on a segment of TransCanada’s illegitimate pipeline outside of Saltillo, TX. As promised, Tar Sands Blockade’s rolling campaign of nonviolent civil disobedience pushes forward. Five blockaders total are currently risking arrest to stop work on this segment of the Keystone XL pipeline. Contractors discovered their presence early in the work day, and work at the site was called off shortly thereafter.”

One protester in a local news story (video below) explains why it’s so important for this group to stop construction of the pipeline.

The pipeline you say, infringes upon your Constitutional rights?  Well no actually, no it doesn’t.

But the genius doesn’t end there … the group of protesters chained themselves to equipment that wasn’t even being used.

Money quote from the news story:

“TransCanada says the protesters chained themselves to a third-party contractor’s equipment that was not going to be used today.”

The group is so committed to the cause that they’ve decided to work all the way up until lunch time.

“It’s after lunch now, so we’re gonna follow the lead of our contractor and police friends and call it a day!

Of course, pay no mind to the concessions TransCanada has already made in supporting a new pipeline route in Nebraska, one that would shield sensitive areas from construction.

“Today TransCanada announced the selection of a revised route for the Keystone XL Pipeline which bypasses the sensitive Sandhills region of Nebraska. The new route will result in the project crossing fewer miles of threatened and endangered species habitat, and fewer streams, rivers, and wetlands while completely avoiding sensitive Wellhead Protection Areas where the state’s groundwater resources are particularly shallow. These changes will further increase the resiliency of the Keystone XL pipeline which the U.S. State Department already declared ‘would have a degree of safety greater than any typically constructed domestic oil pipeline system.’”

But hey, never let facts yet in the way of a good misguided protest.

Hippies are so awesome…

What if Spongebob Characters Played in Classic Movies?